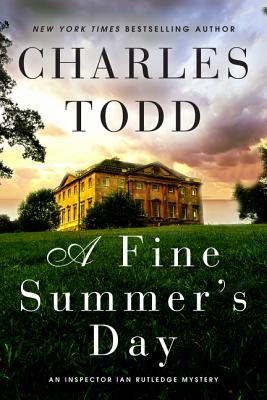 Buy on Amazon
Goodreads
Also by this author: Question of Honor, An Unwilling Accomplice, Hunting Shadows, A Pattern of Lies, No Shred of Evidence, The Shattered Tree, Racing the Devil, A Casualty of War, The Gate Keeper, A Forgotten Place, The Black Ascot, A Divided Loyalty

Seventeenth in the Inspector Ian Rutledge historical mystery series revolving around Ian, a dedicated Scotland Yard detective on the eve of World War I in July of 1914.

This was beautiful, heartbreaking, and bittersweet. I’m not sure if I would have preferred to read this at the very beginning of the series — before A Test of Wills — not knowing what was to come for Ian or if knowing what is to come, makes this so much more heartbreaking.

It begins with the news about the archduke’s assassination in Sarajevo, a moment that will have far-reaching effects around the world. The reasons for the archduke being targeted have always been glossed over, and we never got to “meet” them as people in history classes. The way in which Todd brings in the more personal touch with these two made me feel it so much more. It certainly wasn’t the future they had planned. We do know that Ian’s future has taken a sharp, new turn with a woman he loves. Seeing her, reading about her, makes me grateful for his escape.

I had read A Fine Summer’s Day out of order. And now that I’ve read No Shred of Evidence, I hate, hate, hate that I have to wait for #19 to come out. There is such promise for the future!

It would be lovely if we had foresight and could tell if the one with whom we fell in love were the right person for us. For Ian, it’s everyone around him who sees the truth, but love has blinded him. Unlike our already knowing about Hamish, a bit of backward foreshadowing, only makes Hamish’s fate even sadder.

Todd does a beautiful “info dump” when he has the vicar admiring Ian’s car. Very, very nicely done. The back history about the evolution of the jury was an interesting tidbit.

I am annoyed that we never do learn one way or the other about the truth of Evan Dobson.

All that manipulating and maneuvering Ian had to do!? I absolutely hate Bowles. How can Scotland Yard put a man like him in charge? As for Inspector Farraday. How can he be so ignorant of the people in his area? I hate cops who don’t care if they find the right wrongdoer.

The identity of the killer is rather obvious. It’s the how he’s doing such easy, silent killing that’s the mystery, and Todd turns that truth into a nightmare. An excellent read even without Todd providing this back history on Ian before the war.

“the playing fields … [which] … had made men who helped rule the Empire.”

On a fine summer’s day in June, 1914, Ian Rutledge is more interested in proposing to the woman whom he deeply loves, shrugging off the cautious concerns of his friends and family.

To the north, on this warm and gentle day, another man in love — a Scottish Highlander — shows his own dear girl the house he will build for her in September. While back in England, a son awaits the undertaker in the wake of his widowed mother’s death.

This death will set off a series of murders across England, seemingly unconnected, that Rutledge will race to solve in the weeks before the fateful declaration in August that will forever transform his world.

As the clouds of war gather on the horizon, all of Britain wonders and waits. With every moment at stake, Rutledge sets out to right a wrong — an odyssey that will eventually force him to choose between the Yard and his country, between love and duty, and between honor and truth.

Inspector Ian Rutledge is not quite twenty-five and loves his work at Scotland Yard. Frances is Ian’s sister. Mrs. Holly is their housekeeper. Melinda Crawford is an old family friend who shocked the neighborhood with how she set up her household. Ram, her chauffeur, is a Sikh; her maid, Shanta, is a Hindu. Ross Trevor is Ian’s close friend; his father, David, is Ian’s godfather and was/is a refuge for Ian. Morag is the Trevors’ family housekeeper in Scotland.

Jean Gordon is the woman he loves, and she’s caught up in the romance of planning a wedding, showing off with her friends, and urging Ian not to be a coward. Major George Gordon is her happy father. I think Private Meecham is an aide to the major. Simpson is the Gordons’ butler. Kate is Jean’s cousin and seems a very wise young woman. Jenny, Patricia, Margaret, Georgina, Maud, and Elizabeth may be Jean’s bridesmaids. Marianne Hayes is another friend.

Scotland Yard
Chief Superintendent “Old Bowels” Bowles is Ian’s boss and a more idiotic man to have in charge of a position where thinking is called for, I don’t know. Chief Inspector Cummins is friendly and an ally for Ian. Inspector Davies has the churchyard case in Netherby. Sergeant Gibson is a miracle worker when it comes to networking and information gathering. Sergeant Hunt and Inspector Perkins are some of the men quitting.

Moresby, Yorkshire
Inspector Farraday prefers leaping to conclusions without facts. Constable Blaine. Ben Clayton is a widower who retired from his furniture-making shop with his son Peter taking over. Joseph Minton works in the shop. Ben’s daughter, Annie, keeps house for her dad. Michael is a younger, more footloose son. Mrs. Alberston and Miss Sanderson wouldn’t mind helping Ben with his widowed state. Mr. and Mrs. Tom Calder are Ben’s neighbors; she helps her sister out at her tea shop, The Tea Cozy. Mr. Talmadge was Ben’s other neighbor. Dr. Sutton is the local physician. Edward Hartle is working on an article about the ruins. Mark Kingston was wild as a youth and now works for a haberdasher in Scarborough. His father is dying. Tad is his cousin; Hilda is his bitch of a wife. I absolute LOVE what Tad says about her at the end! Mary is the elder Kingston’s housekeeper. Danny had been sending Ben birthday cards.

Bristol, Somerset
Sergeant Miller finds some back history for Ian.

Netherby, Somerset is…
…east of Bristol. Lolly, a.k.a., Edgar, is the barber.

Beecham, Somerset
Evan Dobson was a leatherworker with a wife and a five-year-old son, Henry. Mr. Atkins owned a greengrocer’s and had a profligate son, Young Thomas Atkins. Lucy Muir is a young, very intelligent woman who loves to do research and has a black cat named Abigail. The vicar is in love with her. The now-retired Sergeant Ralph Taylor had arrested Dobson.

Stoke Yarlington is…
…just west of Wells. Constable Hurley is the police presence there. Joel Tattersall liked to read and shared the house with his sister, Miss Tattersall. Mrs. Betterton is their daily. Bob Bryant is their gardener. Mrs. Reid runs the inn. Dr. Graham is the village physician.

Wells
The unethical Inspector Holliston is in charge. Thomas Simmons is Tattersall’s solicitor and handles the Tattersalls’ trust fund. William Barry is Simmons’ head clerk. Rachel Barclay is the snotty bitch. Jenner is the assistant manager at Simmons’ bank.

Mrs. Abbott is missing a farmworker, Tommy. Judith, Nan, and Bethy are her daughters. Dr. Wylie is the physician whose horse, Nellie, isn’t too happy about motorcars.

Swan Walk, Kent is…
…the home of Fillmore Montagu Gilbert, a retired barrister who had been famous in his day. He’d also been a friend of Ian’s father. Claudia Upchurch is Gilbert’s daughter married to a doctor, Sidney, and living in Portsmouth with their three children. Edgerton was a Crown Prosecutor as well. Dr. Greening is the local physician. Inspector Williams has Swan Walk within his jurisdiction. Judge Abner had presided.

Alnwick, Northumberland
Inspector Penvellyn is too new and investigating the murder of a local headmaster, Mr. Stoddard, of Riverton School. His wife doesn’t understand why he would commit suicide. Inspector Martin is sent up to replace Penvellyn.

Torquay, Devon
Terence Chasten is an arrogant, retired businessman who’s helping with the books at the bakery his brother, Fred, owns. Inspector Sefton.

The retired Colonel Richard Crawford is Melinda’s cousin and has been a friend for years. His daughter, Bess Crawford, has her own mystery series. Simon Brandon is also retired and Crawford’s batman.

Scotland
Hamish MacLeod, a young Scotsman, is proposing to his love, Fiona MacDonald. Ian is not the only one planning his near future.

Sarajevo was…
…where it all went pear-shaped and assassins took down the Archduke Ferdinand and his wife, Sophie. Emperor Franz Josef doesn’t even like his heir. Tsar Nicholas and Kaiser Wilhelm are as stupid as the emperor with their thoughtless posturing.

Mrs. Butler killed her abusive husband. Teddy Browning is an unwanted suitor. Richard is engaged. Toby MacBride is a regular escort of Frances’. Captain Devereaux is with a Wiltshire regiment. Charles Talbot is with the Foreign Office. Hartle is a haberdasher. Some of the officers flitting in and out of the Gordons’ home include Strickland and Captain Harvey.

The cover is beautiful, the sunset of A Fine Summer’s Day, as we look up a green, grassy hill at the manor house at the top, all golden as the sun begins to set on the British Empire.