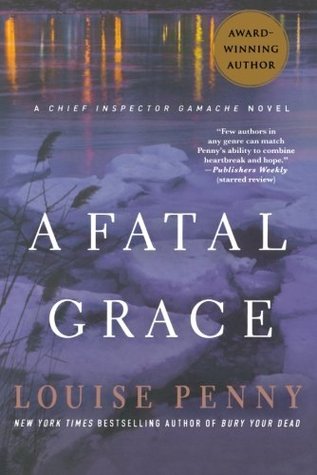 Welcome to winter in Three Pines, a picturesque village in Quebec, where the villagers are preparing for a traditional country Christmas, and someone is preparing for murder.

No one liked CC de Poitiers. Not her quiet husband, not her spineless lover, not her pathetic daughter—and certainly none of the residents of Three Pines. CC de Poitiers managed to alienate everyone, right up until the moment of her death.

When Chief Inspector Armand Gamache, of the Sûreté du Québec, is called to investigate, he quickly realizes he's dealing with someone quite extraordinary. CC de Poitiers was electrocuted in the middle of a frozen lake, in front of the entire village, as she watched the annual curling tournament. And yet no one saw anything. Who could have been insane enough to try such a macabre method of murder—or brilliant enough to succeed?

With his trademark compassion and courage, Gamache digs beneath the idyllic surface of village life to find the dangerous secrets long buried there. For a Quebec winter is not only staggeringly beautiful but deadly, and the people of Three Pines know better than to reveal too much of themselves. But other dangers are becoming clear to Gamache. As a bitter wind blows into the village, something even more chilling is coming for Gamache himself.

Second in the Chief Inspector Armand Gamache cozy mystery series and revolving around Gamache and a small cast of villagers from Three Pines in Canada.

And winner of the 2007 Agatha Award for Best Novel!

My Take
An excellent cozy, cottage mystery with Québecois Christmas traditions as Gamache, a Miss Marple and Hercule Poirot wrapped in one with his easy, laidback style, and the core cast of village characters from Still Life, 1, get jolted by yet another murderous mystery. Hmmm, what are the chances of a small village charging through murder yet again?

It’s the core group with additions — we do need new (to us) villagers to keep it interesting — and Gamache has a new rookie to whom he’s teaching the trade of murder. Clara is freaking out about her art possibly being discovered — I suspect I’d love Clara’s artwork! — while Agent Nichol is still as self-absorbed as ever. And the fire incident does not help her self-esteem at all. Although I’m thinking that Uncle Saul’s legacy might have been laid to rest, please god.

This was an interesting read for me as a writer/editor, especially in light of all my research into self-publishing as CC has her horrible book that no publishing house wants to touch, and yet she’s convinced it’s the next runaway bestseller of the century. How is it that people like her create such peaceful ideas which they don’t understand?

We do learn how Myrna arrived in Three Pines, how Jean Guy was pulled into Homicide, and shockingly, how insensitive Jean Guy is. I was very surprised. For as much as he idolizes Gamache, I should have thought he was as kind and considerate as his boss. We also learn more about the Arnot case that has put a stop to Gamache’s career.

“I see nothing wrong with that … Gabri and I follow the way of Häagen Das. It’s occasionally a rocky road.”

It’s such a contrast between the happy warmth of friends at Christmas with the vicious attacks of an insecure woman who can’t bear that others might be happy. Although, even the happy ones have their sad moments. Em’s will make you cry.

This one had me totally at a loss as Penny tossed in so many twists and turns that I ended up standing on my head, backwards. Mostly in shock at the betrayal at the end. Read it anyway, you’ll be FINE, just as I was.

The Story
It’s a delightful flurry of Christmas shopping and enchanting display windows interspersed with the cold realities of a miserable mother, a more miserable child, and death.

All while Em holds her réveillon between Christmas Eve and Christmas Day. The execution is both brilliant and macabre. Murder in full view and no one saw anything.

Meanwhile, Gamache has his own nightmare swirling in.

The Characters
Chief Inspector Armand Gamache of the kind eyes and calm face is stagnating at the Sûreté in Montreal due to a case in which he ignored his orders. Reine-Marie is his so very understanding wife and a librarian. Marc Brault is Gamache’s opposite number over at the Montreal Metropolitan Police with whom he has a standing Boxing Day tradition. Jean Guy Beauvoir is Gamache’s second-in-command with a love for fine clothes, and Isabelle Lacoste is part of his team. Superintendent Michel Brébeuf is Gamache’s best friend and his supervisor.

Robert Lemieux is the duty officer at the Cowansville police station in the Eastern Townships. Dr. Lambert is the ER doctor who became suspicious. Dr. Sharon Harris is the coroner. Agent Yvette Nichol is back! Reassigned to Gamache by his arch-enemy, Superintendent Francoeur. Ari Nikolev is Yvette’s proud, yet deceitful father. Superintendent Arnot thought he was God and encouraged his men to play God.

The Core Inhabitants of Three Pines
Clara is an artist who creates collages and has yet to find her market. Or vice versa. Her husband, Peter Morrow, is already famous, but works so slowly on his intensely magnified paintings that they’ll never get rich. Fortunately, those money problems were taken care of in Still Life. Lucy was Jane’s dog and now lives with the Morrows. Myrna Landers is a heavyset former psychologist who now runs the village bookstore. Ruth Zardo is the curmudgeonly poet, who had won a Governor General prize for her work. She’s also the volunteer fire chief! Olivier Brulé and his partner, Gabri Dubeau, own a bed & breakfast in Three Pines; Olivier sells antiques as well while Gabri is the most delicious cook. And Philippe Croft is now waiting tables at the bistro.

Émilie Longpré, Kaye Thompson (she ran Thompson Mills for decades), and Beatrice Mayer, a.k.a., Mother Bea, who runs a meditation center, have been the three musketeers for yonks. Gus and David are the family Em lost. Eleanor Allaire was a bright and shining child, and a friend of Em, Kaye, and Bea’s.

Saul Petrov is a photographer beginning that slide down into a boring middle age. CC de Poitiers is the very OCD author of Be Calm, and no, she does not practice what she preaches. In fact, she goes out of her way to be mean to everyone. Crie is CC’s unloved, unwanted, abused daughter with the most incredible voice; Richard Lyon is CC’s loser husband, what she’s made him into. Raman Das is, supposedly, CC’s guru.

Denis Fortin is the owner of a famous art gallery, Galerie Fortin. Yolande Fontaine was Jane Neal’s niece, and she’s a real estate agent who had a house to get rid of. Georges Simenon has joined Em, Kaye, and Bea’s curling team this year. Billy Williams sets up the bleachers and provides the generator for the game.

Elle is a homeless woman who was strangled. Terry Moscher is the director of the Mission.

The Cover
The cover is so peaceful with its view of the frozen chunks of snowy ice bobbing in Lac Brume. A gray lilac near the front, as you go back, the orange and yellow lights of the village reflect vertically in its waters.

The title is inspired by the triple portrait Clara has created, The Three Graces, only the inspiration is from A Fatal Grace.