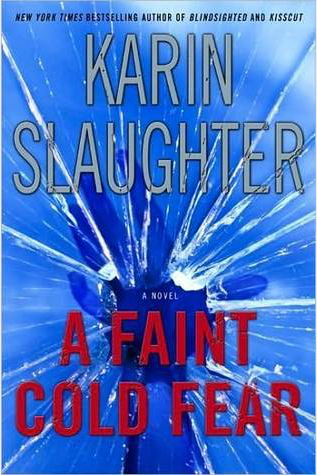 Whoo-whee. This is some complex story what with all the tension and drama happening between and with the core characters. With Slaughter using multiple third person point-of-view, we experience the thoughts and actions of a variety of characters as well as the events in which they’re involved. Events that bring past memories brutally to life for Sara and Lena. Characters who bluster their way through the action, refusing to listen to each other, the exaggerated animosity and overreactions between Lena and Jeffrey, Ethan’s over-the-top approach to Lena, the guilty tension between Sara and her parents, the lies told, the expectations of some that the other involved will back them up, and the lesser drama between Sara and the Jeffrey who wants her back.

So far, Sara’s work as a pediatrician simply adds depth and color to her character. It’s the assault she experienced that weighs on her and changed her life so dramatically. It adds to the character arc Sara is undergoing, one that includes Jeffrey. He has a lot of growing to do, lots to make up for. For Sara may be dating and still attracted to her ex, but she’s being very careful:

”He liked [Sara’s place] so much that Sara must have sensed it; they spent the majority of their time together at his house.”

Jeffrey, on the other hand, is very aware of how much he screwed up and is determined to make up for all of it. Although, his jealousy does rise up when Mason shows up, but I absolutely loved Sara’s comeback:

”You sowed enough wild oats before we were married to qualify for farm subsidies.”

I do appreciate the regrets? appreciations? that Jeffrey expresses about Lena’s having left. It’s that quick mind of hers that he regrets the most. There are other useful insights, and not all of them are positive, as in Sara’s realization about her parents as she recognizes them at the hospital. The attentions of a former beau that settle Sara’s mind.

Starting to wonder if I’d get to the obvious conflict in the story, weren’t you? Well, you might think these murders would be the primary conflict. But no. The major conflict is that between Jeffrey and Lena. Each has their own issues which adds to the story’s tensions and makes it all the more interesting. It’s their frustrations with each other that enriches this as those tensions spread out into their relationships with others.

The introduction of Ethan’s character is an oddity, and I’m curious as to why Slaughter introduced him. He does add quite a bit of drama to the story, and perhaps the plan is for his behavior to showcase Lena’s reactions. ‘Cause, lemme tell ya, they’re not what I would expect from Lena. She must have a real hate on for herself. It doesn’t help that she’s drinking all that alcohol.

That reason Slaughter gives about why Jeffrey was hired as chief of police ends up funny with that comment about “would have taken up goat sacrifices”, *laughing*.

It’s weird to say this about a thriller, but it’s cozy. I like the complexity of the characters and yet Grant County has a warm vibe in its small-town life. I can’t wait to get started on the next story.

A suspicious suicide followed by another forces Dr Sara Linton and Chief Jeffrey Tolliver into contact with former detective Lena Adams, who is now in a security job at the college. Too bad for the college that neither Sara nor Jeffrey will accept that either death is a suicide.

It’s the attacks on women though that set Sara off, for it’s a violence that brings back her own traumas, exacerbated by the danger to her sister, Tessa.

Jeffrey has his own issues with the angry yet vulnerable Lena with the crucial knowledge she may have but refuses to give up.

Dr Sara Linton is the medical examiner for Grant County and the town’s pediatrician who is dating her ex-husband. She rescued two greyhounds, Billy and Bob, who are the laziest things…working to make up for all those years racing around a track. Bubba is Sara’s cat. Tessa Linton is her nearly eight months pregnant younger sister who works as a plumber for her dad, and she’s a selfish pig. Devon Lockwood is the father. Eddie Linton is their father who has his own plumbing business, Linton and Daughters. Cathy Linton is their mother. Granny Earnshaw was Cathy’s mother.

The Grant County PD covers…
…Heartsdale (where the station is located), Madison, and Avondale. Police Chief Jeffrey Tolliver is Sara’s ex-husband. Detectives Matt Hogan and Frank Wallace are partners. Marla Simms is 80-something and the department secretary. Officer Brad Stephens is a very young patrolman.

Lena Adams is a former detective with Grant County PD until Jeffrey gave her an ultimatum seven months ago. Now she’s a very unhappy security guard on the local college campus. Her past history is a horror story. Nan Thomas, the librarian at the college, was Sibyl‘s lover (Sibyl was Lena’s twin, who was murdered a year ago by the same man who kidnapped and tortured Lena (Blindsighted, 1)). Hank is the uncle who raised the twins when their parents died. He lives in Reece and runs a bar there. Mrs. Moushey is Nan’s neighbor.

The Heartsdale Children’s Clinic is…
…all Sara’s. She bought out her retiring partner. Dr Hareton “Hare” Earnshaw is Sara’s cousin, helping out. Nelly Morgan is the office manager. Molly is the clinic nurse.

The Heartsdale Medical Center is…
…the local hospital where Hare normally works. Dr. Matt DeAndrea is filling in for Hare.

The Grant Institute of Technology is…
…the local college. Chuck Gaines is the new of head of security and Lena’s jerk of an idiot boss. His daddy, Albert Gaines, president of the Grant Trust and Loan, got him the job. Ron Fletcher is another security guard. Kevin Blake is the dean of the college and more interested in golf. Candy Wayne is his helpful secretary. Professor Mike Burke is in charge of the men’s dorms. And deaf as a post. Richard Carter is Sibyl’s gay ex-teaching assistant who adores gossip — whether it’s true or not — and is now an associate professor in the biology department. Esther Carter had been his mother.

Dr Jill Rosen is a mental health therapist. Carla is the receptionist at the college mental-health department. Lily is one of Rosen’s patients. Andy Rosen had been her and Brian’s manic-depressive (and manipulative) son. Dr Brian Rosen is a professor working on a biomedical grant for some research he’s doing. He used to work in the corporate world for Jericho Pharmaceuticals where Jill had been his secretary. Monica Patrick had been the head of Jericho personnel.

Ellen Schaffer is a student jogger who found the first body; Keyes House is her sorority house. She’s also on the college skeet team. Ethan Green is a student who took the same yoga class as Lena; he’s trying to escape his past and deal with his anger issues. Zeek White had been Ethan’s white supremacist stepdad. Paul and the drugged-out William “Scooter” Dickson (Andy’s best friend) are in Ethan’s dorm.

Grady Hospital is…
…based in Atlanta and was where Sara was doing an internship before her assault. A respected level-one trauma center and a public teaching hospital, it has a bad rep. Dr Mason James, specializing in pediatric trauma, is an old boyfriend of Sara’s who is recently divorced…and interested. Ned is Mason’s three-year-old son. Dr. Beth Tindall is Tessa’s surgeon.

Eileen is a yoga instructor. Hal owns a tattoo parlor. May Tolliver is Jeffrey’s miserable alcoholic mother who lives in Sylacauga, Alabama. The brutal Jimmy Tolliver had been his dad and a thief who died in prison.

The cover is a shattered blue, a hole in the window with cracks radiating out from it. The author’s name is in a black outlined gray at the top with interruptions in the lines where the cracks cross those letters while the title is at the bottom in what appears to be an embossed red. There’s an info blurb at the top in black while another bit of info is in white against a dark blue background, of what appears to be a square in front of the window with a distorted hand, fingers spread, behind the glass.

The title should be plural, for it’s not just A Faint Cold Fear for one person, but for a number of characters in the book.