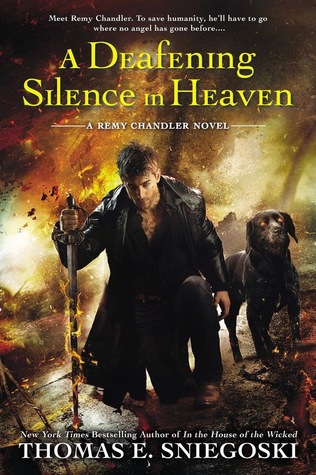 He was once known as the angel Remiel. But, generations ago, Boston PI Remy Chandler renounced Heaven and chose to live on Earth, hiding among us humans, fighting to save our souls…

Remy Chandler is hovering on the brink of death, surrounded by friends who are trying to ward off those who would take advantage of his vulnerability. Unbeknownst to them, the greatest threat to Remy is one they can’t fight—God himself. The Almighty dispatches Remy far beyond their reach, to an alternate universe where there has been an apocalyptic catastrophe: the Unification.

Only as he hunts down the source of this calamity, it becomes clearer and clearer that the person responsible for the tragedy may have been none other than Remy himself.

And while he searches for a way to stop his world from following in the footsteps of the doomed alternate reality, enemies are massing in his universe. For the Unification is at hand and, this time, Remy may be powerless to affect its outcome…

Also by this author: Walking in the Midst of Fire, The Demonists, Dark Exodus

Seventh (and, I think, last) in the Remy Chandler urban fantasy series about a rogue seraphim who works as a private eye in Boston with this story taking up in the middle of the ending events in Walking in the Midst of Fire, 6.

One of the things I’ve enjoyed about this series is how easygoing God is. He shows up and chats, asks for help, enjoys his chicken fingers. As for those angels of His…hmph… You’d think His angels would support God’s Will, but it seems God must have given those angels Free Will just as He gave it to those pathetic humans.

Linda adapts amazingly well to the truth about Remy. And a good thing since life quickly goes downhill with Remy dying and the Bone Masters insisting upon fulfilling their contract. Squire provides some fun in this with his incessant appetite. He’s been a figure of humor for me, but in A Deafening Silence in Heaven, his past comes out and pulls me right up. I’m wondering if Sniegoski intends a series based on what happened to Squire and his people.

It was confusing right after the start, when Remy awakens in battle. I thought he had woken up in a dream state; I certainly was without a clue that he was in a different universe. I tell you this so you can avoid this particular confusion, but somehow Marlowe is also in this universe even though God supposedly sent Remy off to another universe. A universe where Unification has gone all wrong, and Remy is supposed to figure out what did go wrong and prevent it happening here. So I get all confused in my head as to how Remy and Marlowe are both there.

Oh, wait, I’m getting it. It is a different universe with its own God (??!), its own Remy and Marlowe — and get this! — its own alive Madeline. I cried and cried in this depressing scene. It does explain Baarabus, at least. I’m still confused, however, about two Gods. Isn’t there only supposed to be one?

It’s a battle for Remy’s friends to keep Remy’s body safe even as the angel is battling to learn the truth in another universe. This whole struggle to keep Remy anchored to life was both interesting and irritating. The flashbacks of Remy’s past were good, but the chunks of what Linda, Ashley, and Marlowe experienced were weird. And I can’t believe Ashley would be stupid enough to interrupt someone who might be trying to help Remy live.

It’s an irritating mix of sarcastically funny, too twee, and too dramatic. I don’t know why it bothers me that Sniegoski mixes the humor and the drama; normally I love that combination of tension and laughter.

It’s Unification, a joyful time of forgiveness and reunion. Forgiving the Morningstar and those who rebelled against God and Heaven and merging Hell back into Heaven. Only there are those who are against this easy forgiveness.

And Remy is dying in his bed, surrounded by friends struggling to protect his body from assassins.

Remy himself is far beyond anyone’s reach, for the Almighty has sent him on a mission to fix the catastrophe that has become Unification, a mission to an alternate universe.

Only as he hunts down the source of this calamity, the truth wriggles out from under rocks, from behind the mists, that the person responsible for the tragedy may be the last person we would ever expect.

Once known as the seraphim angel Remiel, Remy Chandler is now a Boston private detective living amongst humanity. Marlowe is his black Labrador, the dog with whom Remy converses. Linda Somerset is his human girlfriend who works as a waitress at Piazza; the woman with whom Francis fell in love before he disappeared into Tarturus. Madeline was Remy’s wife whom he’ll love and miss forever. Ashley Berg is Remy’s young neighbor who has gone off to college. Detective Stephen Mulvehill is with Boston Homicide and one of Remy’s best friends.

Francis, a.k.a., Fraciel, is a fallen angel, a former Guardian angel who can walk between realities, and who disappointed Remy horribly in A Hundred Words for Hate , 4. The Pitiless Pistol is a golden Colt .45 Peacemaker of great power and bullets one can control, a gift from the Morningstar. The Wrath of God is God’s plague that can take many forms. Eliza Swan had been the only other human woman for whom he had cared. Leona is a very hungry (and sentient) 1960 Lincoln Continental we first met in In the House of the Wicked , 5. Do not piss her off.

God is the old man. Israfil, the Angel of Death, owes Remy a favor from back in A Kiss Before the Apocalypse, 1. The Archangel Michael leads a squad of angels with Satquiel as his second-in-command. Filthies are angels who have been twisted by events. Retrievers are angels created to find and return anything He believes was lost. Nomads (called Cowards by the soldiers of Heaven) are those who chose no side in the Great War. Azza is their leader.

Lucifer Morningstar, a.k.a., the Son of the Morning, is busy having a suit fitted by his tailor, Donahan, who had also been one of Lucifer’s soldiers during the war.

Squire is a starving hobgoblin who can use the Shadow Paths to travel where he will. Assiel is another of the fallen, a Denizen, known these days as Darnell who pays for his sins by caring for souls like Candace Ransley at Saint Joseph’s Nursing Home and those like Mr. Daron for whom he cares at home.

Thuc Pham is a holy man and the caretaker for a scrap of Creation that now rests in the Vietnamese village of Nà Bái. Angus Heath is a cook at Methuselah’s, a bar that caters to the supernatural and owned by Methuselah. Phil, a minotaur, is its doorman.

The other universe is…
…where Unification went badly wrong. Baarabus is a Hellion, a combination of soul and body. Sampson, the biblical strongman, and his children — Leila, Sid, Dante, and Anthony — come to Remy’s aid.

The old man, a.k.a., the Fossil, scrapes stink, rot, and charred flesh off his body on a daily basis. He owes Remy after events in A Kiss Before the Apocalypse, 1.

The Garden of Eden…
…has been drifting since God cut it loose from Heaven. Izzy and Jon are the last of the original bloodline of Gardeners, Adam and Eve. Shapeshifting ancestors of the angels which were created by Malachi, the Shaitan were trapped in the Garden and are poisoning it; their greatest wish is one of destruction.

The Bone Masters are…
…an ancient group of demonic assassins who never stop. Ripper of Souls is one of the them. The too-stubborn Broker sets up the contracts. Harvesters are a particular family line, which selects the eggs from which the creature will grow and psychically bond with its trainee. Their death turns them into a biological weapon that fires bone bullets coated with poison.

Walking in the Midst of Fire gave us the background on Simeon, a man betrayed by Jesus, the forever man who has both rings of Solomon. Beleeze, Dorian, and Robert (formerly Tjernobog) are three of the demons bound to serve Simeon along with Constantin Malatesta, a Keeper torn between himself and the Larva, a demonic entity that infests him. Patriarch Adolfi is one of the leaders of the Keepers, an organization within the Vatican.

Amanda Blite is a traitorous witch in need of money. “Noah’s Orphans” from the anthology, Mean Streets, 1.5, have a cameo as do Gerta and the other surviving Nephilim children from Walking in the Midst of Fire. Meg Miller is a paralegal at Fragomen, Del Rey, Bernsen & Loewy. Joe is hoping to die while his kids are out getting coffee. Syed Hamza is a terrorist bent on blowing up a marketplace, until that moment.

Unification is an event in which Heaven and Hell are reconciled. Tartarus had been a prison for those who had betrayed God. Denizens are fallen angels who served time in Tartarus and then were sent “to earth to serve out the remainder of their penance”.

The cover is warm in its yellows, oranges, and browns with the black of Remy’s leather coat and Marlowe’s fur coat standing out against the crash and burn of Hell behind them.

The title is a prescience of disaster, for there is A Deafening Silence in Heaven that terrifies Remy. 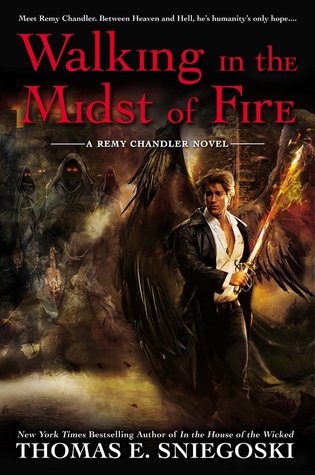 4 responses to “Book Review: A Deafening Silence in Heaven by Thomas E. Sniegoski”