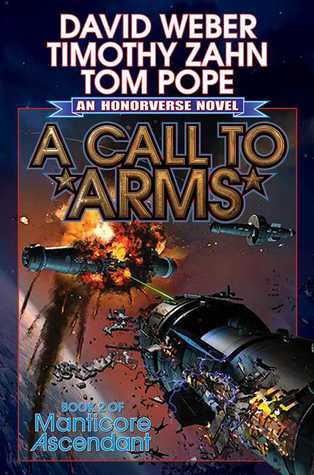 Buy on Amazon|Buy on Audibles
Goodreads
Also by this author: Cauldron of Ghosts, Treecat Wars, A Call to Duty, Hell's Foundations Quiver, At the Sign of Triumph, A Call to Vengeance, Uncompromising Honor, Through Fiery Trials, The Shadow of Saganami, Cobra Outlaw, Cobra Traitor

Second in the Manticore Ascendant military science fiction series (a prequel to the Honor Harrington series) and revolving around that stickler of a Royal Manticoran Navy Lieutenant Travis U. Long. It’s been four years since A Call to Duty, 1.

It just goes to show that politicians are alike everywhere and when, allowing their own interests free rein, promoting their issues with lies.

It’s obvious that A Call to Arms is a set-up to promote the Navy — versus all the anti-Navy politicians. The drama is increased with all the descriptions of how weak the Navy already is. As for the one-in-the-eye, Breakwater wants to transfer ships from the Navy, outfit them with weapons, and have his people trained to operate them only there’s no room in the academy for his people nor enough people in the Navy to transfer over to train Breakwater’s. Unless Breakwater gives in on funding.

Nor does it help that the Navy is enduring nepotism instead of promoting quality.

After reading Honor Harrington, it is weird to read about missiles being considered expensive and valuable, so much so that they need the cooperation of three officers to launch one.

Weber & company use a third person global subjective point-of-view from a number of perspectives, which gives us insight into a number of the characters’ stories.

Poor Travis has an unhappy character arc that will hopefully expand his perspective. He does have his admirers, but they’re all trying to get him to see the bigger picture. As for Ensign Locatelli, well, he’s a welcome surprise.

Web & company get heavyhanded with going on about Manticore not being able to win. It does seem impossible, but geez, do they have to go on and on about it?

We’ll see both sides of greed and a passion for one’s country. And we’ll learn how “travesty” became part of Travis’ signature. Poor guy.

Yep, it’s action-packed with characters from one extreme to the other. The text is heavy with science and engineering, but if you skim that part, you’ll enjoy the story.

Lieutenant Travis Long of the Royal Manticoran Navy is the sort of person who likes an orderly universe with officers who do their duty. The good news is that Travis is one of those rare people who has a talent for thinking outside them when everything starts coming apart. The bad news is that two of the best ways of making enemies ever invented are insisting on enforcing the rules…and thinking outside them when other people don’t.

But there are powerful forces in the young Star Kingdom of Manticore’s Parliament that don’t think they need the Royal Manticoran Navy. After all, what does a sleepy little single-system star nation on the outer edge of the explored galaxy need with a navy?

Unhappily for them, the edge of the explored galaxy can be a far more dangerous place than they think it is. They’re about to find out why they need the navy…and how very, very fortunate they are that Travis Long is in it.

. . . composed of three planets and is ruled by King Michael; Mary is his wife. His son, Capt Edward Winton, is the crown prince and in command of Sphinx. Edward is married to Cynthia and they have a son, Richard, who will be an ensign aboard Hercules, and a daughter, Sophie. Elizabeth is Edward’s half-sister who married widower Carmichael de Quieroz, Baron New Madrid, and she will be raising Carmichael’s three children. King Roger and Roger’s daughter, Queen Elizabeth, had died in office. Thorson is Manticore’s single moon.

The Royal Manticoran Navy
First Lord of the Admiralty Cazenestro has promoted out-system trips. Admiral Carlton Locatelli has an officious nephew whom he protects. Admiral Anastasiya Dembinski is in charge of BuPers (Bureau of Personnel). Lt Cmdr George Sukowski is one of hers.

Lieutenant jg Travis Uriah Long, a mustang (an enlisted man promoted to officer), is a by-the-books Navy man with ingenuity and the ability to think outside the box. Travis’ half-brother, Gavin Vellacott, Baron Winterfall, is on the opposition, which is against the Navy. Travis’ mother breeds dogs. This is not to say that Travis has a relationship with his mother or Winterfall.

HMS Salamander‘s captain is John Ross, Baron Fairburn. Senior Chief Fire Control Tech Lorelei Osterman has a widowed father who’s looking forward to her coming home for a visit . . . after he tells her to look after young Fenton Locatelli who’s posted aboard as a know-it-all ensign. So unfair! Cmdr Maximillian Todd is the XO. Chief Marulich is on the com. Wanda Ravel is TO. Spacer First Class Hugo Carpenter is only trying to keep Locatelli at bay. Ravel. Forward Gunnery Officer Lt jg Pascal Navarre.

HMS Invincible‘s captain is Allegra Metzger, who gets a vindictive Admiral Locatelli. Lt Tessa Griswold, Cmdr McBride, and Lt Cmdr Perrow is the TO.

HMS Casey is almost ready. Her commander is Commodore Rudolph Heissman. Cmdr Celia Belokas is his XO. Travis is transferred in — with a much better commander. Lt Cmdr Alfred Woodburn, Lt Rusk, Lt Dahl is the Forward Weapons division head, Chief Kebiro is on com, Shapira, and Albert.

The Aries, captained by Ellen Hardesty, is part of MPARS. Townsend gets transferred yet again. Ensign Kyell is nominally in charge of weapons. Spacer Second Class Ghanem. TO Ensign Rol Badakar is inexperienced, but his first assignment had been Damocles. Husovski is an example of the negative of nepotism. The MPARS Taurus, captained by Kostava, also ignored the memo.

Capt Eigen of the HMS Guardian reported pirate activity in Secour. Swiftsure and Victory get back in service. Gorgon, HMS Gemini, and Sphinx. HMS Vanguard is commanded by Capt Davison, who refused to use his missiles. Captain (Capt) Billingsley is tyrannical and in command of the Thorson. Capt Franklin Casey had been the only recipient of the Manticore Cross. It will be renamed the Locatelli Cross. The Cross of Military Valor will be renamed the Osterman Cross. Jonny Funk had been Travis’ old drill instructor and a friend.

Manticore Space Control has some of people who get excited when a ship comes through, such as the freighter Hosney.

Phobos had been a debacle investigated by Dapplelake with some nasty fallout (A Call to Duty, 1).

. . . an obscure world that had been taken over by General Amador Khetha who declared himself the Supreme Chosen One until he was overthrown.

. . . a neighbor of the Star Kingdom, which has a very small fleet of cargo ships. Commodore Gordon Henderson had participated in the Secour disaster. Professor Cushing is the head of their tiny Military Intelligence and Decryption Department. Commissioner Peirola is head of the Department of Ports and Customs with a fondness for good food and wine. Police Detective Dolarz is with the Quechua City PD, investigating those gunshots along with Lt Nabaum.

Khetha has taken refuge here in its capital city, Quechua City. Ulobo is one of Khetha’s aides. Score Settler is Khetha’s diplomatic courier ship. The Black Piranha is a criminal organization.

The Silesia Confederacy is . . .

. . . is a government that turns a blind eye to piracy.

The Volsungs are . . .
. . . are a mercenary group, with a bent toward piracy, headquartered in Rochelle on the planet Telmach. Admiral Cutler Gensonne, a.k.a. Admiral Tamerlane, is their leader and had formerly served under Anderman, and he’s aboard Capt Sweeney Imbar‘s Odin. Clymes. Tyr is commanded by the arrogant Blakely. Capt Olver claims to be the personnel transport Leviathan. Umbriel and Miranda are part of the Sidewinder Force and captained by Patterson and Hawkin. Naglfar. Copperhead (its captain is Von Belling) and Adder are in their own stack. Ganymede guards the starboard flank. Phobos is hanging back. Capt De la Roza is in command of Thor and the main force. Cmdr Jenz is in the CIC. Obregad is the TO. Fox. Selene.

. . . another planetary system that is still friendly with Manticore. Mota, a system hacker member of a gang that was part of the Secour pirate attack, is a prisoner at Deuxième Prison. Guzarwan had been in command of the gang and Wanderer, which included Dhotrumi, Vachali, and Shora.

. . . the biggest system in the world, based in Chicago. They had passed the Eridani Edict, which forbids bombing a planet.

Axelrod of Terra is . . .
. . . a powerful and evil corporation with a huge secret. Jeremiah Llyn is so average looking that he makes an excellent spy. One with no conscience. Pointer is one of the big dogs.

Soleil Azur is a freighter. I think Torrell Baker is its captain.

Captain Shresthra of Berstuk commands the Izbica. His crew includes the engineer, Pickers, and Nguema is the helmsman. Grimm, Bettor, and Merripen of Axelrod are passengers aboard Izbica.

Tash McConnovitch, a data scavenger, only has to deliver the data. Hermie.

The cover is primarily browns and blacks, starting with the background in black. A good three-fourths of the cover is an inset bordered in a thin red. Within it is a space battle with the foremost ship making a direct hit on the middle ship and a third ship off to the right in the back. Most of the inset’s background is a gradation of brown angling off to deep blue to the upper right. A misty deep blue slice of a planet is in the lower left corner. At the top of the cover are the authors’ names. Overlapping the top border is a two-tone ribbon scroll in blue with a pale blue outline with the overall series info in white. Immediately below it is the title in a rounded bronze with a black and gray outline, and stars on either side of “arms”. At the bottom left of the cover is the immediate series info in a textured gray blue.

Oh yeah, the title is definitely A Call to Arms as Manticore faces its first serious attack. 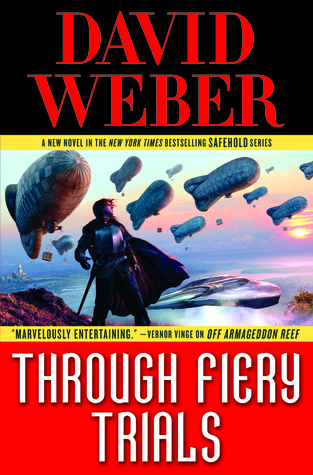 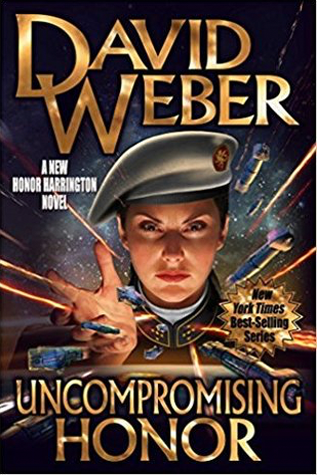 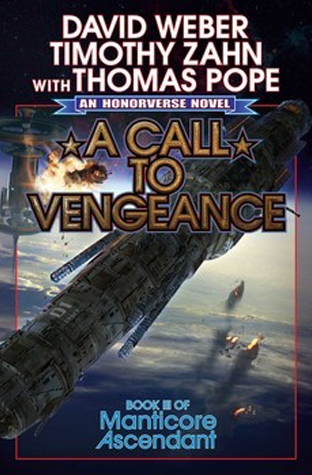