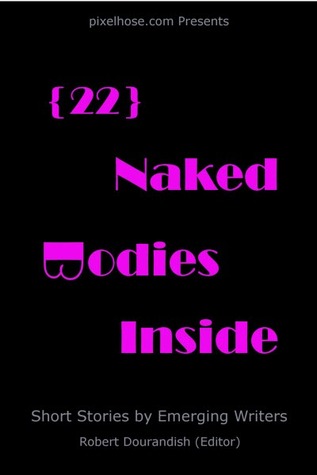 
An anthology of 22 short stories revolving around “a level of openness that is rarely seen in works by emerging writers who, often, struggle in pain with conflicts arising of the necessity to stand naked before their readers”. Hmmm, we’ll see, won’t we. Yep, the promise was essentially fulfilled. There were a few that I didn’t like, and those were more than offset by the tremendous number of short stories that I loved.

According to the editor of this anthology, Robert Dourandish, these stories were selected “using a combination of social votes and our opinion”.

Christine Riehl‘s “Leaving Well” is a memoir of her father dying, and it was absolutely beautiful, even though I cried through most of it.

Hayley Huntley‘s “How I Quit Ballet” is different, although cute. It’s another memoir, but of the highlights of the years she spent learning ballet. It’s not well put together. More of a bits and pieces from a diary with headings.

Bellakentuky‘s “Peg” is a snapshot look at a group of kids and their interaction with a one-legged man.

J.C. Martin‘s “Just One Cut” is omigod funny in a very dark way. Martin sets us and her characters up for a somewhat surprising ending. Let that be a lesson to the naggy ones!

Lucille Belluci‘s “Cicadas” is an interesting look at an expat’s view of the final days of Shanghai in 1937 before the Japanese invaded. But I really don’t understand the point of the last bit of action between the boy and Sybil.

Robin Devereaux-Nelson‘s “Food” is a sad tale of school teachers, aides, the principal, and a horrible mother who allow the bullies to get away with it. What’s truly sad is how widespread this type of allowance is, refusing to believe a child simply because it’s awkward.

Vandy Gibson’s‘s “Charley” is another sad tale of a little boy abandoned in so many ways by his drug-addicted mother. Gibson softly and sadly encourages an empathy for three lost people.

Ashley Woodmender‘s “Brotherhood” is just over a page of a young lady’s remembrance of her first day of class. Woodmender does a nice job of pulling you into her story and making you wonder what happened.

Sarah Wallenfang‘s “The Woods” is nicely written, but rather irritating in that she begins this story and leaves us hanging at the end.

Brianna Soloski‘s “Fall into Me” is a bit too much like reading instructions. Then she just yammers on and on about an immature college student and her “heartbreaking” moments. Pass.

Srikanth (India)‘s “Loss” is a very short story of, yes, loss. It’s too short to work up tears, but they’ll be there if you think on it too long.

Diana Ng‘s “A Tale of Two Mothers” is yet another sad tale. This one appears to be of the author’s mother and grandmother and their hardships in surviving in a traditional Chinese lifestyle. It certainly makes one appreciate a loving family.

John Malone‘s “One of My Ears is Missing” is just too funny in a very gruesomely fairytale-ish way. It’s very Roald Dahl-ish!

Lisa Hill Newman‘s “Even the Pure Intentions Fail” is weird. Sure, I can understand the Hummer rage, but she certainly is an incompetent planner, and yes, Virginia, I suspect there are reasons why you haven’t gone far…

Then there’s the ending… What is this??

Caroline Callahan‘s “Hope and Other Childhood Things” is a lovely reminiscence of her mother’s garden and a child’s joy in it. Callahan takes us on a tour, both physical and annual, in which we slip under a little girl’s enthusiasm for growth and beauty.

Donna L. Kaust‘s “Amazing Grace” is a rather funny, panicky account of losing power and the terror of finding one’s way. Kaust certainly paints an interesting picture of an insecure person.

Richard W. Aites‘ “Beggar’s Blessing” brings us inside his character’s head where this young Marine mentally explores his options as he contemplates discharge from the corps to his final career choice.

David W. Moore III‘s “Shadows of the Wind” is just too funny as the protagonist contemplates the oddity of actually…shock…reading a book. Even more odd, reading one in paper format! It’s short, but a truly cute look at how the future may be for readers. I definitely liked the idea of a neural jack with free access to any book in the Library of Congress!

Sylva Nze Ifedigbo‘s “Lunch on Good Friday” has a not-so-surprising ending. If anything, I’m impressed with his patience! An interesting look into Nigerian culture that feels so similar to a religious American home. Ifedigbo’s English is very good with an engaging effect from his own native language and the British influence.

Lisa Morris‘ “Saving Annabelle” is a sweet and very sad tale of a Labrador Rescue operation. Morris pulled me right in.

Tara Parian‘s “Mustached Murderers” is another funny tale of insecurity, security systems, and paranoia. I’d say Parian got it just right as to where the ridiculousness came from, LOL.

Ali Shirazi‘s “Shaho” was an unsatisfying read, although well written. While I did appreciate some of the tidy-up of the crime scene, as well as the punishment, it was not for these pederasts’ activities that they were punished. And Shirazi just leaves us hanging as to their purpose. I hate that.

The cover is a solid black background with bright red-violet text for the title. The rest of the text — the publisher, a brief reference as to what the anthology is about, and the editor’s name — all in white.

I suspect the title is more of a reference to the authors and their exposing their thought processes to us through their writing; 22 Naked Bodies Inside could well stand for 22 Naked Minds.