Earth: a space pirate’s dream when it comes to booty, but not a good place to hide when bounty hunters come looking. Pulling up stakes means Rafe must leave his vintage trailer behind, but in the process he acquires a passenger, a mouthy female who seems to think she’s calling the shots.
She’ll soon learn who’s the captain. And it isn’t Annabelle, his sassy ship.
A true red-blooded male, Rafe does his best to teach Emma her place in the universe, but her human attitude gets in the way. So why doesn’t he sell her when he gets the chance?
Damned if he knows, but despite his motto of 'The Universe Revolves Around Me', he finds himself putting his life in peril to save hers. But that doesn’t mean he’s letting her in on all his secrets. Some things a man has to carry alone, and some revelations a pirate will kill to keep.
The universe might be out to get him, but he’s not giving in without a fight.

So I wasn’t really sure what I would think about an alien romance, at least he looks human and isn’t a different color. 🙂 He is just from a different planet and a space pirate.

So Rafe thinks Earth is a space pirates dream because of all the goodies he can get and sell off in space. He orders things and they are delivered by the sexy and cute Emma whom he loves to tease and she has no idea he is an alien until some ruffians come after him and they have to make a getaway in his ship.

Emma can’t believe she is in a space ship, and there are aliens and people chasing them. It’s all a lot to take in, especially being all alone up in space with one sexy space pirate.

Of course, it wouldn’t be a Langlais book without some sort of mystery that will go from one book to the next probably. Rafe has a lot of secrets and they might be catching up to him. Emma is in for one heck of a ride.

Like all of Eve Langlais’s books, it is full of laugh out loud moments and a bit of suspense surrounding the ending which makes you want to dive right into Sinner to see what is going to happen.

Not my favorite series of hers but it was fun and low key and I really needed that as I have been having some reading duds lately. 🙂

Hello, my name is Eve. I’m a stay at home mom who writes full time in between juggling my three kids, hubby, and housework, I write hot romance with a bit of a twist. I am a Canadian author who belongs to ORWA, the local chapter for Ottawa Romance Writers and more recently SFWA. I am what is known as hybrid published which means I have works with some small e-publishers, some indie published titles and more recently, I signed a contract with St. Martin’s Press for 3, hot shifter stories.

I am a Canadian author who belongs to ORWA, the local chapter for Ottawa Romance Writers and more recently SFWA. I am what is known as hybrid published which means I have works with some small e-publishers, some indie published titles and more recently, I signed a contract with St. Martin’s Press for 3, hot shifter stories.

I’m writing romance, my way. I do have a twisted imagination and a sarcastic sense of humor something I like to let loose in my writing. I like strong alpha males, naked chests and shifters. Lots of different breeds of shifters. I am also extremely partial to aliens, you know the kind who abduct their woman and then drive them insane…with pleasure of course.

My heroines, they kind of run the gamut. I have some that are shy and soft spoken, others that will kick a man in the balls and laugh. Many of them are chubby because in my world, girls with curves ROCK! Oh and some of my heroines are a teeny tiny bit evil, but in their defense, they need love too.

Some of my work does push boundaries and cross lines. Good and evil aren’t always clear in my tales, and in some cases, I’ve stomped on well known religious ideologies. Have I mentioned my imagination is a tad bit warped?

I tend to have a lot of sexual tension in my tales because I think all torrid love affairs start with a tingle in our tummies. And when my characters do finally give in to the needs of their flesh? Well, let’s just say, you shouldn’t be reading my stuff at work. The door is wide open, explicit and hot. Really, really hot.

I love to write, and while I don’t always know what my mind is going to come up with next, I can promise it will be fun, probably humorous and most of all romantic, because I love a happily ever after.[/su_note]

Chandra Skyye does a good job with Eve’s novels and I have gotten use to her voice, but all of the books sound the same because she doesn’t seem to have a great variety of voices. I know it’s hard to do them differently and she has a nice voice so it’s not like I hate it or anything. 🙂 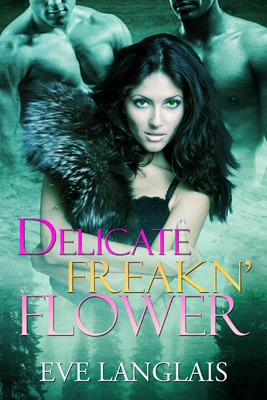 3 responses to “Audiobook review of Pirate”