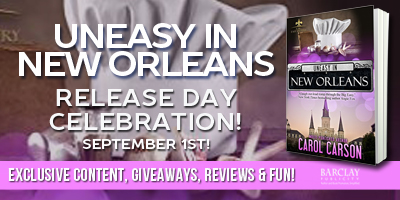 It’s a Big Easy Mystery with Uneasy In New Orleans

UNEASY IN NEW ORLEANS has everything you love about the French Quarter, delicious food, sexy men, mystery, gossip, trouble, and dead bodies…Well maybe not all of what people love about the city. However Finnigan Jones is dealing with all of these things and more. UNEASY IN NEW ORLEANS is the first in a new series called the Big Easy Mysteries from multi-published author Carol Carson.

To learn more about Carol Carson and her books check out her new website!

About UNEASY IN NEW ORLEANS

FINNIGAN JONES HAS A PASSION FOR COOKING AND A PECHANT FOR TROUBLE.

Dead bodies aren’t on Finn’s New Orleans walking tour of cemeteries and haunted houses. Ditto disappearing bodies. Now she has to explain to Detective Jack Boyle how her missing corpse has turned up in the Mississippi putting her smack-dab in the middle of a murder investigation.

Unfortunately, another of Finn’s odd jobs is taking questionable photos for Jack’s PI brother, Tommy. After she snaps shots of a dubious pair of lovebirds, they stalk her, then kidnap her. Now Finn’s dealing with two lunatics intent on killing her. Or driving her crazy. She’s not sure which.

All Finn wants is to survive school and become the best chef in the world.

FINN’S LIFE IS ABOUT TO GET EVEN MORE COMPLICATED.

On Sale in Digital Now:

Add UNEASY IN NEW ORLEANS to your TBR pile on Goodreads!

Multi-published author Carol Carson was born and raised in central Iowa. She is a former finalist in the Romance Writers of America’s Golden Heart contest and is an avid bookworm who actually enjoys doing research. Her other passions include travel, American history, the Kansas City Chiefs, the St. Louis Cardinals and dark chocolate. She has lived in Colorado and Kansas, and currently lives with her husband in a log home on the outskirts of St. Louis, Missouri. Write to her at carol.carson@centurytel.net or check out her website at carolcarsonbooks.com

She heard a faint noise. She wasn’t alone. A tall stranger whose face looked familiar came toward her, his strides long and deliberate. “You the one takin’ pictures of me?”

“No,” she automatically lied.

His tone left little doubt about how he felt about her. ‘Dislike’ would be too kind.

‘Outraged and highly motivated to harm her’ seemed more likely. Which was when she remembered why he looked familiar. Franco, the wandering husband she’d photographed last night in all his pants-around-his-ankles glory. It took a nano-second to register the thought that he shouldn’t have known where to find her before extreme terror kicked in.

Closer to the stairs than Tommy’s office, Finn managed to dash past him in her rarely-worn heels.

He grabbed at her but she ducked. She reached the outer door and twisted the doorknob. He yanked her from behind, and pulled her toward him. A nasty blast of stale breath hit her in the face. The knob slipped from her sweaty hand. She wrenched her backpack off and screamed. She swung it and connected with his head. He grunted and lost his grasp on her.

Finn took advantage of the moment and wrenched open the door. She scrambled out to the landing. With one foot on the first step, he jerked her by the back of her sweater. She screamed bloody murder again and swung around to hit him.

Tommy appeared and yanked Franco up, smashing him in the jaw. The man stood in the tiny space swaying. Finn took advantage. She swung her backpack. This time, Franco sidestepped. And she hit Tommy full force.

He lost his balance, arms cartwheeling in the air as he reached for the rail. He missed and tumbled down the steps, crashing against each riser with a horrible thump until he lay crumpled at the bottom. Franco raced down the stairs, hurtled over Tommy’s prone body, then disappeared up the dark alley.

Finn flew down the steps, her backpack forgotten. Tommy lay at the bottom, his eyes closed, his jaw clenched.

She knelt by his side, her breath jerking in and out. She patted his cheek, and prayed he wasn’t dead. She couldn’t take two dead bodies in one day, no matter how insensitive it sounded.

He opened one eye and squinted at her, his face pinched. “Hell, I, I broke my…damn it all to hell…my damned leg.”