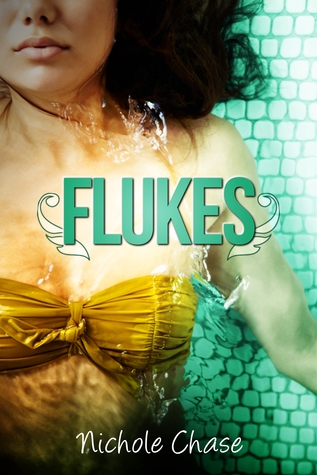 
First in the Flukes urban fantasy series for older young adults and revolving around an adopted mermaid. The couple focus is on Meena and Blake.

I won this from Goodreads in a contest and do intend an honest, if very late, review.

I like the introduction to Flukes. Enough to whet my curiosity and pull me along. I particularly like the antagonism between Meena and Blake that Chase follows with some back history — in non-info dump style, yay! — on Blake that makes me even more curious. And it only gets better when Ben asks Blake’s help AND takes him seriously. Never an attitude Blake experienced with his own father.

It’s a sweet, fun story that does rely upon a number of tropes that I wish Chase had twisted a bit more, but I did like it. I liked it enough that I’ve been thinking about the story for the past two years! (Friends helped me pack up my house, and I’m still unpacking…sigh…)

There’s some nice bits of conflict with even better resolutions. I do hope that Chase will write more in this series. (See the very short story below.)

An unexpected influx of teen workers means Flukes can do some much-needed sprucing up — they desperately need to land that cruise line contract! Only Meena has a secret guarded closely by her family — a secret as dangerous as the sea and buried just as deep.

While the family is on high alert, no one was expecting that Meena would be so attracted to sexy-as-sin Blake Weathering, one of the new workers. And, the last thing Blake needs is the distraction of a mysterious girl with teal eyes who pulls at his heartstrings.

Meena will never leave her family’s sanctuary. Ben and Marion are Meena’s parents. Violet, Meena’s best friend, is off to college after this summer; her mother, Dr. Lyla, helped with Meena’s adoption papers.

Flukes is…
…the family’s animal sanctuary that offers dolphin-swims. Mitch, her pregnant mother, Jallia, and Stormy are dolphins, Meena’s companions in the water. Becca is a bird trainer; Laura is her assistant. Harper, Ruth, and Mennolly (someone likes their Pern!) are sea lions.

Mireille is a mermaid; Jacen Montgomery is a merman and Mireille’s cousin. Sabrina is Jacen’s aunt who disappeared with her young daughter, Maleena.

Blake Weathering is doing community service. Vincent is Blake’s gay younger brother, and he and his friend Liv, a.k.a., Olivia, have been best friends forever. Lizzie is an older sister who ran off to New York to be an artist. Their wealthy dad, Marshall, is more interested in appearances and manipulating people. Their parents are separated and Blake’s mother, Claire, lives in France.

Josef is a guy who has done small, quality jobs for Marshall. Mr. Jordan is an investor; he, his wife, Lyla, and his daughter, Kimberly, are visiting. Meghan is Kimberly’s friend with whom Blake had a brief fling.

Cruise Excursions is the cruise line the sanctuary is hoping to win over.

Devin assaulted a girl at a bar. Marcus is also working at the sanctuary. Trevor is the high school soccer captain.

The cover is enticing with all that lovely water that the dark-haired Meena is under. She’s wearing a golden, shirred bra top that complements her skin tone that is itself complemented by the blue-green tiled surface behind her. Or is it tile?

The title is the family sanctuary, Flukes.

Nichole Chase, “A Mermaid for Christmas” 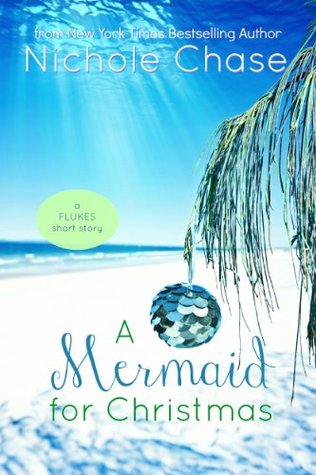 A free short story — 1.5 in the Flukes urban fantasy series suitable for young adults, and revolving around Meena, a young mermaid.

This was cute and very, very sweet and thoughtful…and much too short! I’m hoping Chase writes more. It includes a bit of foreshadowing with Blake. Mm-hmm. And I absolutely adored the squeaky dolphin slippers, lol!

It’s a visit to Santa Claus with a six-year-old and very worried Meena concerned about Santa wearing that hot, scratchy jacket.

Meena is a six-year-old mermaid who’s been adopted by Ben and Marion who run an animal sanctuary, Flukes, in the Bahamas.

Blake is a little boy visiting Santa with his mother.

Santa seems to know more about mermaids than one would expect.

The cover is too cute with its island Christmas theme of a white sandy beach, blue skies that look more like the sun streaming underwater, and a hanging sequined Christmas ornament in blue that looks just like the scales on, say, a mermaid’s tail?

The title is what Meena asks for, “A Mermaid for Christmas”.

7 Responses to “Book Reviews: Flukes & “A Mermaid for Christmas” by Nichole Chase”