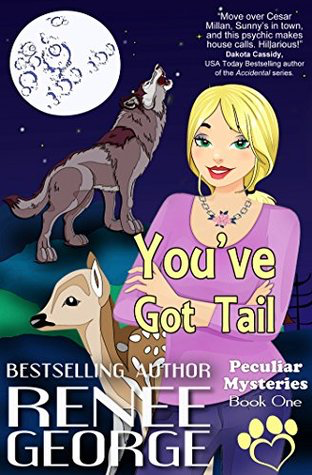 I suggest getting over to Amazon and “buying it for free” while it lasts.

George catches your interest fairly quickly as one townie after another tells Sunny she shouldn’t be here. Okay, yeah, it’s obvious what’s meant, but between Sunny’s visions and her encounters with the townsfolk, Babe, and that dog who keeps showing up, it’ll keep ya reading to see how it plays out.

I’m of two minds on how George gave us insight on Sunny’s thoughts (George uses first person protagonist point-of-view from Sunny’s perspective). Part of me was so annoyed that she had Sunny flipping back and forth so immediately on what she was thinking and what she said. I got confused too frequently. But then again, it was cute as well…once I got it sorted out.

It’s a story that sets the individual against the town, one that wants her gone, although the townsfolk do give out mixed messages. But there’s much worse preying on Peculiar, and they’re darn lucky Sunny is so stubborn. As for Babe, there is definite doubt about which way Babe will choose, as he hates the town and can’t wait to get out. Again.

Another niggle was Sunny’s attitude toward Babe when she first shows up in Peculiar. It makes no sense to me that she kept trying to push Babel out at the start. If she’s there to find Chav, wouldn’t she want his help?? Although I was impressed with Sunny’s willpower, as the story progressed.

It’s a fun read, and I’m looking forward to reading the next in the series, Thank You For Not Shifting.

A town full of people hiding the truth, insisting she haul her U-Haul and butt back to San Diego will keep Sunny Haddock busy as she tries to unravel the strange happenings in Peculiar, Missouri. Now if only she can get her hormones under control, find her missing friend, and make sense of those visions and the dog no one else can see.

Ambrosia “Sunny” Sunshine Haddock is psychic and a vegetarian. Her parents are a couple of hippies, living on a commune.

Peculiar, Missouri, is…
…the Trimmels’ hometown where everyone knows each other. Ruth and Ed Thompson run the Doe Run Automotive garage and have nine kids: Tyler and Taylor, twins, are the oldest; Dakota, Michele, Emma Ray, and Lisa Ann are daughters; and, Leroy “Butch”, Thomas and, Linus (the youngest) are more brothers. Tyler’s been married for two years to Darla, and they recently had twins.

Billy Bob Smith is the town’s shaman and their doctor. Jolon “Jo Jo” has a hard life with his alcoholic father, Brady Walker/Corman, who misses his runaway wife, Rose Ann, every day.

Sheriff Taylor is married to Jean. His deputies include Tyler Thompson and Eldin Farraday. Sheila Murphy is such a slut; she’s also the mayor’s assistant and was Judah’s girlfriend. Mayor Neville Lutjen owns the C Bar.

Delbert and Elbert Johnson are twins and run the general store. Elton Brown owns a used furniture store. Becky Baker runs the bakery, Beck-E’s Bakery, along with her husband. Blondina Messer (she has three boys and a daughter) runs the Blonde Bear Cafe where Selena is a waitress. Larry is Selena’s snake of a boyfriend. Tammy Tolliver is a seamstress. Robbin Clubb owns a used bookstore.

The missing include…
…James Trainer, Robert Nance, and George Herald.

The cover is a cartoon graphic with a wolf howling away from the cratered full moon at the deep blue night sky, standing on a teal blue and green platform behind the sunny-haired Sunny. She’s standing with her arms crossed and wearing a pinkish lavender scoop-neck T, a necklace with a centered rose, and deep blue trousers. Nestled up to her side is Bambi, a fawn still sporting his spots. There’s an info blurb at the top right in white. The title is a black-outlined pale yellow that is centered across Sunny’s chest. In the bottom left is another info blurb with the author’s name below it in white. The series information, also in white, is on the right with a yellow heart of a paw print below it.

The title is an unexpected discovery when Sunny discovers You’ve Got Tail.

One Response to “Book Review: You’ve Got Tail by Renee George”