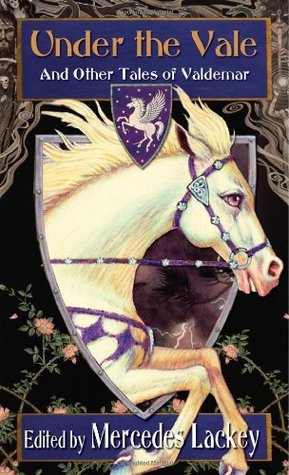 Under the Vale and Other Tales of Valdemar by Mercedes Lackey
Series: Tales of Valdemar #7, , Heart, Kerowyn, Wil and Leila
Genres: Fantasy, YA
Published by DAW Books on December 6, 2011
Pages: 344
Format: Paperback
Source: the library

Goodreads
Also in this series: Sword of Ice and Other Tales of Valdemar

The Heralds of Valdemar are an ancient order, drawn from all across the land, from all walks of life, and at all ages, these unusual individuals are Gifted with abilities beyond those of normal men and women. They are Mindspeakers, FarSeers, Empaths, ForeSeers, Firestarters, FarSpeakers, and more. Sought and Chosen by mysterious horselike Companions, they are bonded for life to these telepathic, enigmatic creatures. With their Companions, the Heralds of Valdemar ride circuit throughout the kingdom protecting the peace and, when necessary, defending their land and monarch.

A Valdemar anthology of sixteen short stories and one essay on worldbuilding. Half of the stories refer to a character or time period within the Valdemar series while the other half could fit in anywhere.

If you’re as obsessed as I am, you may want to re-read the Mage Wars, Mage Storms, and the sections on Elspeth, Selenay, and Kerowyn. It is not a necessity. It’s just been so long since I’ve read them…sigh…

“Heart’s Peril” (Heart, xx; ten years after Ree & Jem get to the farm)

“The Bride’s Task” (Kerowyn has made captain)

“Sight and Sound” (Wil and Leila)

Mercedes Lackey‘s “The Simple Gifts” is a most unexpected “hero”. Donnat Stains is a man-whore rapidly running out of towns, counties, countries to pursue his desires. It’s that last town that sends him fleeing much too early and lands him where Destin and Ardred, two Companions, kidnap him for their own purposes…bwa-ha-ha… Seems they have need of a pair of hands.

Rosemary Edghill & Denise McCune‘s “Catch Fire, Draw Flame” finds an odd group taking its ease at a midsummer fair. A Herald who can’t hear his Companion, a turned-off mercenary, a Bard who didn’t know he preferred the road, and a Healer who can’t stop. Seems they were brought to this fair for a purpose, to set a smooth-talkin’ fellow back on the right path.

“There’s a man here at the fair with the power to make Elade change her mind.”

The funny bit is that’s not what he meant, lol. There’s an interesting point about the distinction between men with psychic gifts who are Chosen. Only those with morals are acceptable.

Elizabeth A. Vaughan‘s “In an Instant” finds Queen Selenay at a loss and in despair, for she’s found her lifebond at the end of the battle against Hardorn’s Ancar. He’s too much like his brother…

Daniel Shull‘s “A Healer’s Work” there’s a lot of set-up chat in this before Shull finally settles into the whole point of the story. The desperate aid required by Layelle, Herald Mellie’s Companion. For her herald may be dying from the damaged mage channels in her brain. And no other healers in Haven have ever worked with such channels before.

Elisabeth Waters‘ “A Leash of Greyhounds” finds it lucky that Lena has Animal Mindspeech to save the dogs and call in a Herald and their Companion to arbitrate a disastrous decision after a tragic accident.

Kristin Schwengel‘s “Warp and Weft” finds Stardance remembering the lessons of her beloved Triska when spinning fiber into thread as she and others search the Vale for any possible magic.

Jennifer Brozek‘s “Discordance” is a series of bad news of similar bar brawls resulting in deaths. It’s a lesson to us all to use care when rejecting anyone.

Brenda Cooper‘s “Slow and Steady” is what Shay’s mama always told her. Take it slow and steady for Shay has problems with too fast, too quick. It’s a disability that has created problems for Shay in the past, and when her mother is murdered, that past rises up for Shay, leaving her terrified.

Stephanie D. Shaver‘s “Sight and Sound” will leave you weeping. An accident of drowning, one is saved and the other is not. It could never have been prevented and affects so many. A brief peek into the life of Heralds and a Bard.

And yet, Shaver brings in a bit of humor that helps:

“:After putting up with a Chosen like you, I’ll be galloping for the Bright Havens when my time comes!:

She has a short story, “Safe and Sound”, about Wil and Leila in Crossroads & Other Tales of Valdemar, 3.

Michael Z. Williamson & Gail L. Sanders‘ “The Bride’s Task” creates quite the conundrum at the Collegium. Students are supposed to leave their previous lives behind them. Only Nerea isn’t taking no for an answer from anyone but her pledged.

This one’s a pip! It has a nice moral about allowing events to roll out and that life is not set in stone. To accept change.

Ben Ohlander‘s “Fog of War” is disjointed and confusing. In some respects it’s a good thing as it conveys a sense of the battle that was fought, but in others, it doesn’t work. The idea was good, but it’s that last statement by Danilla that makes me say huh, what?? as I don’t remember that being a question. And that’s after reading it twice.

Kate Paulk‘s “Heart’s Peril” is another installment of Ree and Jem. They’ve been ten years on Grandad’s farm and this one finds Lenar and his small family having dinner with them. It’s Little Garrad who sets the cats among the bears, and it’s Ree who reassures young Meren that he’s not an animal. It’s a good thought to keep in mind for anyone can act like a beast just as anyone can act decent.

Sarah A. Hoyt‘s “Heart’s Place” is another tale of Ree and Jem. This one has Lenar’s Mage examining Meren to reassure the villagers. The opening salvo on the family’s determination to ensure the family’s survival, for they consider Ree and Meren their own. It’s Grandad’s actions that really kick things into gear, and Lenar will have to lean on those Particular Laws.

Tanya Huff‘s “Family Matters” is too, too funny. That Annamarin is wondrous indeed, and if she is trapped here on the farm, it would be truly, tragically tragic, lol.

“‘He is a song walking above the mud we less lovely creatures tread upon.’

This is a great story that is a reminder for all of us that we are who we are no matter where we stand, and it’s because of family.

Fiona Patton‘s “The Watchman’s Ball” has a twist at the end that left me fluttering and laughing at how good it was for morale. Now if I only knew if that tradition kept on…

Nancy Asire‘s “Judgment Day” is a Solomon of a case to be tried by Perran, a traveling circuit judge dispensing the laws of Vkandis. it’s close to home as it is his assistant’s hometown which he left with great relief years ago.

Larry Dixon‘s “Under the Vale” is a fascinating essay on the back history of magic and the disasters that befell the world of Velgarth of which the country of Valdemar is a part.

The cover is a black background framed by a tangle of scrolling brown branches at the top and twining rose vines at the bottom. In the middle is a steel gray riveted inset frame in the shape of a shield, a stormy purple sky in its background and a white Companion galloping out of it, harnessed in purple. Atop this shield is another, smaller shield with the same gray border encapsulating a purple starry background with a pegasus flaring its wings in profile. Behind this is a deep blue box with the title in Gold and the subtitle below it in white. At the bottom is the same box with the “edited by” in white.

The title is more about that last essay and lifts the veil on what is Under the Vale, how it evolved and why as well as the engineering genius of it. You only thought it would be fascinating to live in a Vale…

6 responses to “Book Review: Under the Vale and Other Tales of Valdemar by Mercedes Lackey”