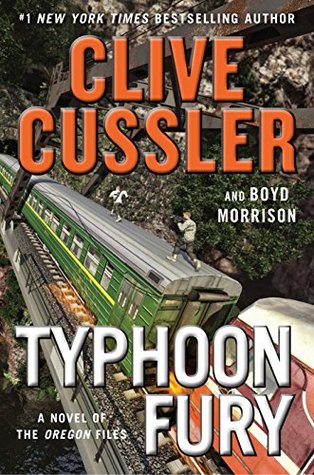 Twelfth in The Oregon Files action/adventure thriller series and revolving around the Corporation, a covert team of specialists who sail the world in a tramp merchant ship.

Cussler/Morrison are setting us up at the start with four separate scenarios that merge, keeping us informed all the way with global third-person subjective point-of-view, so we know what most of the characters are thinking. Very useful as Cussler has the action a’popping all over…and all over the world!

It’s a case of loyalty engenders loyalty and betrayal begets betrayal. I do have to laugh when bad guys betray each other. What do they expect? I’m simple at heart. Love works for me as does loyalty. And I do love it when the bad guys get theirs.

Drug running — and a highly addictive addition from World War II(!), revolutionaries with some terrifying weapons, art theft, spycraft, and mercenaries all complicate the Oregon’s mission — the team has a reputation and an in with the CIA. They’re a handy group when the U.S. government needs deniability.

What I love about this series are the core characters, the men and women who make up the crew of the Oregon and all those terrific gadgets. Yep, I’m gadget girl. I do love me them toys, lol. *Shudder*…those magnetohydrodynamic engines sound so cool! And note. I said “women”. Yep, women are as valued crew members as the men.

The story also finds a replacement for Mike Trono. As for that desperate scientist…how stupid — and greedy — can he be?

I had no idea there were over 7,000 islands that make up the Philippines!? And we learn the “real” reason the U.S. bombed Hiroshima. I do enjoy it when an author makes use of true history in their story, *grinning*

Hired to search for a collection of paintings worth half a billion dollars, Juan Cabrillo and the crew of the Oregon soon find themselves in much deeper waters when they go up against the vicious leader of a Filipino insurgency who stumbled upon one of the most lethal secrets of World War II: a drug intended to turn soldiers into super-warriors.

To stop him, the Oregon must not only take on the rebel commander, but a South African mercenary intent on getting his own hands on the drug, a massive swarm of torpedo drones targeting the Oregon, and an approaching megastorm that threatens a foundering ferry.

The Corporation is…
…a business of former military, inventors, and artists who roam the world in the Oregon, a highly odorous, camouflaged ship, putting out fires for anyone whose operation isn’t in conflict with U.S. interests. Juan Cabrillo, a former field agent with the CIA who has a double major in political science and mechanical engineering from Caltech and speaks Arabic, Spanish, and Russian, is the Chairman. Max Hanley had done two tours in Vietnam, time as a POW, and is their chief engineer and vice-president of the Corporation. When Juan is absent from the ship, he gets the Kirk Chair. Linda Ross, a Navy vet, is the Corporation’s vice-president of operations and an excellent ship handler, although Eric is better. Eddie Seng, former CIA, speaks Mandarin and English and is the director of shore operations. Marion MacDougal “MacD” Lawless, a former Army Ranger, is their best with a crossbow. Franklin Lincoln, a former Navy SEAL, does like the weight room and is their best sniper — with a rifle. Hali Kasim is the ship’s communications officer. Gomez Adams is the resident expert in flying the Oregon’s drones and their helicopter pilot. Mark Murphy is the ship’s weapons officer with a love of skateboarding and video games. It makes sense since he had been working in the defense industry as a weapons designer. Eric Stone is Murphy’s best friend and their best ship handler after Juan. The Magic Shop can craft anything from disguises to incredible “toys” and is run by Kevin Nixon. Dr. Julia Huxley is their on-board doctor with her own surgical suite. Maurice is the ship’s steward and former British Royal Navy.

Dr. Beth Anders is an art historian with a knack for spotting forgeries and a talent for investigation; she works for Interpol as well as doing freelance. Captain Raven Malloy is a former MP investigator with a double major in psychology and Middle Eastern studies from West Point who speaks Farsi and Arabic and is now working as Beth’s bodyguard.

CIA
Langston Overholt IV had been Juan’s mentor and had later encouraged Juan to create the Corporation. He also assigns most of their missions. Abby Yamada is the NSA’s chief cryptanalyst on this mission.

Dugway Proving Ground is…
…the main testing site for chemical and biological systems. Greg Polten is a scientist with a shaky product. Charles Davis is the chief chemist on the project. General Amos Jefferson is in charge of assessing the project.

The New People’s Army
Salvador Locsin is the leader of a splinter cell. Tagaan is his second-in-command and a marine engineer by training. Stanley Alonzo, an Interior Ministry functionary, was a prisoner who became a guinea pig. Dolap is Locsin’s cousin and one of his most trusted men. The Magellan Sun is the ship they use. Dr. Mel Ocampo is a research chemist who thought this was a stellar gig. Other chemists include Maria Santos and Paul.

Babylon Fire supplies fire trucks and firefighting equipment all over Asia. The Pearsall is a desperate ferry with over 1,200 passengers.

Fred is a drunken idiot from Florida. Nightcrawlers is a club. Udom, a Thai drug dealer, needs authentication and appraisal. Nikho Tagaan is a rival dealer.

Alistair Lynch works for Interpol. Baxter claims to be a French Interpol agent.

Zhong Lin is a field agent for the Ministry of State Security.

The Ghost Dragon triad is…
…one of Taiwan’s most notorious gangs and an enemy of mainland China and is led by Jimmy Su. David Yao is a Taiwanese traitor.

Gerhard Brekker is a mercenary. Altus Van Der Walla is his second-in-command and a former commando.

Thirteen master artworks were stolen from the Isabella Stewart Gardner Museum in Boston. A Kuyog is a water-based, laser-focused bomb carrying 100 pounds of Semtex.

The cover features a train crossing a truss bridge through very mountainous countryside and two men running along the top of the train. The main author’s name is in an embossed copper with a black outline at the top with the secondary author’s name in a tiny white at the right and underneath the primary’s. The title is right justified at the bottom in a large-scale font in an embossed white with a black outline with the series information in white tucked into the corner formed by the title.

The title refers to the major theme as well as a major inconvenience, as the crew of the Oregon faces the Typhoon Fury.