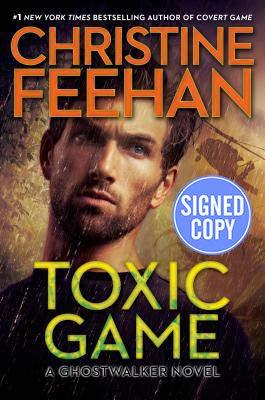 vFifteenth in the GhostWalker paranormal romantic suspense series and revolving around the Louisiana team of GhostWalkers. The couple focus is on Dr Draden Freeman and Shylah Cosmos struggling to survive in Sumatra, Indonesia.

I loved that start, lol. What can I say, I’m a sucker for the too-competent spec ops type *more laughter*, especially when they make such an impression.

“The Air Force pararescue team didn’t seem affected by anything as mundane as the heat or terrorists. The crazy thing was, they were mostly officers. Doctors. … These men had seen combat and looked as tough as nails. … giving off a dangerous vibe…”

This is one of Feehan’s better stories (after that string of jokes she’s done!), but I do have three niggles: the repetitiveness was so annoying; that weird paragraph about Draden and dragons that wasn’t inserted very well; and, I do wish Feehan had been more explicit about the GhostWalkers’ belief that Whitney had engineered the whole thing. I was confused. When I’m reading, I don’t want to have to stop and try to puzzle out what the author is saying.

Feehan uses a third person dual point-of-view from the perspectives of Draden and Shylah, which is the primary source of all the repetition…oy… I know I like it when an author reminds us of events, issues, and pertinent details from past stories in a series, but there is such a thing as OVERkill.

I do love that these two are partners, equal partners. And that while they accept their fates, they don’t stop fighting. And…sigh…Draden is such a romantic…more sighing… That special event…even more sighing…

I also love the supportiveness and love this extended family has for each other. It’s what keeps me coming back.

And I am definitely trying out some version of that shrimp dish Shylah is so excited about at the end!

A terrorist group destroyed a Sumatran village using a deadly new virus. The WHO staff are among the dead. Indonesian special ops soldiers are also among them. Their only hope is the GhostWalkers.

Now, Draden’s only hope is that he can save a bullet for himself. And one for his new-met partner, Shylah Cosmos.

And Calvin believes the GhostWalkers are a joke…

Peony “Shylah” Cosmos is an assassin for Dr Whitney with excellent tracking skills. She’d been sold to him by her parents. She still misses her “sisters”: Belissia and Zara.

Dr Draden “Sandman” Freeman is a gifted surgeon who paid his way through medical school — gaining degrees in genetics, infectious disease, microbiology, and immunology — by being a sought-after model. Eliza had been his foster mother. The one who bought him from his drug-addled mother, raised him with laughter, and taught him about flowers, love, family.

These GhostWalkers are…
…an Air Force pararescue Team Four out of Louisiana overseen by Major General Tennessee Milton. Dr Joe Spangnola is the team leader, a psychic healer and surgeon. Malachai Fortunes is their fact man. Dr Gino Mazza (he’s married to Dr Zara Hightower, Covert Game, 14). Diego and Rubin Campo are brothers, whom I think showed up in Power Game, 13. Dr Trap Dawkins has a super-high IQ, is fabulously wealthy, and has Asperger’s with no clue about social cues — and he’s married to Cayenne, who has tremendous spider powers and cannot cook to save anyone’s life. Dr Wyatt Fontenot is married to Pepper who’s pregnant with twins, and they already have a set of triplets(!), the little viper chicklets: Ginger, Cannelle, and Thym (Viper Game, 11). Grace “Nonny” Fontenot is Wyatt’s fabulous grandmother, offering the team a home. “Gator” Fontenot, one of Wyatt’s brothers, and Iris “Flame” Johnson met up in Night Game, 3. Dr Ezekiel “Zeke” Fortunes, Malachai’s brother, is married to Belisia, (Power Game, 13).

Azami Yoshiie is married to Sam Johnson, a GhostWalker from Team One (Samurai Game, 10) and managed to move a satellite for the guys.

Dr Whitney is…
…a brilliant crackpot and psychopath who has been experimenting on human beings, enhancing their strengths and psychic abilities, and splicing in animal genetics. Helena was the housemother who most cared for the girls. Violet Smythe is a GhostWalker who went very bad.

Three virologists had worked for Whitney: Tyler and Cameron Williams, brothers, and Agus Orucov were hired to create special viruses. WHO is the World Health Organization. Dr Henderson wants them burned. Barry Font is the terrified helicopter pilot.

Indonesia
The Kopassus is the government special forces branch. Bakti is a minor league scam artist who is way out of his depth. Eko is part of his team. Faisal Bataknese does a nice trade in false IDs.

The Milisi Separatis Sumatra (MSS) is…
…a terrorist group in who murdered the village of Lupa Suku in Indonesia. Intan Lesmono is the man who replaced the last commander.

Ethan Montgomery, a former schoolmate of the Wiliams brothers, is a playboy layabout always getting in trouble who is based in Mississippi. Calvin Montgomery is Ethan’s loving, vicious father, and a member of the World Alliance. The stupid Candace is Ethan’s stepmother.

The World Alliance is…
…a super-secret organization that rules the world. Cheng is an extremely wealthy paranoid sociopath with a sideline in selling secrets and allies in the terrorist world (Power Game). And is he ever pissed about his brother’s death.

Greg is a flight attendant on Trap’s plane. Daryl Monroe is Trap’s assistant. Draden reckons Trap is one of the few in the army with his own private army of assistants, lol.

The cover is distressed in browns with the graphic a’slant and the head and shoulders of a dark-haired, dark-eyed Dr Draden Freeman, with the scruff of a beard in a black T-shirt. The background is a helicopter in a sky pouring with rain, with a triskhelion-style image in a deeper brown. At the top is an info blurb in white. The author’s name is in a greenish-gold outlined copper across Draden’s head. The title is in a bright yellow with bright green splotches at the bottom of the cover below Draden’s neck. Below that is the series information, the black font outlined in a blurry white.

The title refers to the Toxic Game, as Draden and Shylah race to eliminate the terrorists and recover the virus.