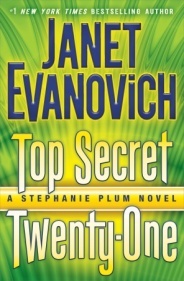 Trenton, New Jersey’s favorite used-car dealer, Jimmy Poletti, was caught selling a lot more than used cars out of his dealerships. Now he’s out on bail and has missed his date in court, and bounty hunter Stephanie Plum is looking to bring him in. Leads are quickly turning into dead ends, and all too frequently into dead bodies. Even Joe Morelli, the city’s hottest cop, is struggling to find a clue to the suspected killer’s whereabouts. These are desperate times, and they call for desperate measures. So Stephanie is going to have to do something she really doesn’t want to do: protect former hospital security guard and general pain in her behind Randy Briggs. Briggs was picking up quick cash as Poletti’s bookkeeper and knows all his boss’s dirty secrets. Now Briggs is next on Poletti’s list of people to put six feet under.

To top things off, Ranger—resident security expert and Stephanie’s greatest temptation—has been the target of an assassination plot. He’s dodged the bullet this time, but if Ranger wants to survive the next attempt on his life, he’ll have to enlist Stephanie’s help and reveal a bit more of his mysterious past.

Death threats, highly trained assassins, highly untrained assassins, and Stark Street being overrun by a pack of feral Chihuahuas are all in a day’s work for Stephanie Plum. The real challenge is dealing with her Grandma Mazur’s wild bucket list. A boob job and getting revenge on Joe Morelli’s Grandma Bella can barely hold a candle to what’s number one on the list—but that’s top secret.

My Take
Whew, Evanovich is getting back on track. Oh, it’s still missing what I consider crucial bits, notably a lack of sexual heat with Joe and Ranger. But it doesn’t feel as though Evanovich is going through the motions as some of her latest books have seemed.

I’ve always enjoyed the conflict Stephanie has over Ranger and Joe, and the heat that Evanovich creates between them, but that heat is just going through the motions. Ranger does say at one point that he seriously considers marrying Stephanie. It’s a statement that titillates at first until the idea percolates in and I wanna smack him. I don’t know if it’s because it just comes out of the blue or if Evanovich hasn’t set this up with any emotion.

Oops, lol, it used to be Stephanie’s mom slugged the booze in secret. Now she’s soaking the meatloaf in it.

It cracks me up that Ranger is tracking Stephanie all the time. It used to piss her off. Now she’s grateful that she’s always on someone’s radar.

Some of the humor is still here. I liked that bit about Morelli being inches from taking what Miriam was offering, lol. Nice double entendre.

Cute. Grandma Mazur has a bucket list with impractical and very un-grandma-like desires. And it seems a little too easy that she got check off several of these. It used to be that Grandma freaked Ranger out. Where is that these days? You know, that’s one of the problems — there’s so little conflict amongst the core characters these days. There was more a sense of family and its internal conflicts.

Jesus, could Stephanie be any more obvious at the bar. And what’s with Leo? Is he that naive? Stephanie knows what her grandma is like, so why would she tell her she’s in Atlantic City?

Hmm, Joe raises an interesting point about the Rangeman building. He thinks “that his building is more secure than it needs to be, and the technology he uses is expensive, complicated, and not readily available”. Heck, and I was figuring it was some kind of deal like the cars and Ranger having an endless supply of black cars.

Well, that settles it. Hell is freezing over. Stephanie is packing a gun AND it has bullets AND she fired it!

The Story
It’s a set-up from the get-go. Someone wants Ranger out of the picture, and he’ll do whatever he has to. But it’s not going fast enough for Stephanie. She doesn’t want someone taking him out.

The Characters
Stephanie Plum is a bounty hunter in Jersey, working for her cousin Vinnie. She also moonlights for Ranger. Grandma Mazur is a crack-up. Her height has shrunk but her skin hasn’t, she carries an Eastwood-sized gun, and isn’t allowed to drive. Hanging out at funeral home viewings is her idea of fun. Stephanie’s mother is long-suffering with the help of ironing and the bottle. Rex is Stephanie’s pet hamster.

Plum Bail Bonds is…
…owned by Harry the Hammer, Vinnie‘s father-in-law. Connie Rosolli is the office manager and guard dog. Lula, a former ‘ho, is about as wide as she is tall who overflows all her clothes due to her preference for lycra in sizes way too small.

Joe Morelli is a Trenton detective in the Crimes Against Persons unit. He’s also Stephanie’s boyfriend. Sort of. Bob is his “his orange, floppy-eared, shaggy-haired dog” who eats everything. His grandmother, Grandma Bella, is a fearsome nutjob who gives people the eye. Anthony is Joe’s brother, and he has a family. Bryan Krieder is a fellow plainclothes in the same unit.

Ranger, a.k.a., Carlos Mancuso, is former Special Forces with an aversion to relationships. He’s also hot for Stephanie.

Rangeman is…
…his company , a small high-tech, high-end security firm. Tank is his second-in-command. Hal is another of his men. Ella is half of a housekeeping couple who takes care of everyone at Rangeman. Bruce McCready is the unlucky Rangeman employee. Rodriguez is a specialist in hearts. Jose and Ryan are more operatives.

I think Mac is FBI.

Randy Briggs is three-feet tall and a major pain in Stephanie’s patootie. He doesn’t take no for an answer. He’s also Poletti’s accountant. He used to be head of security for Central Hospital. Eddie and Bruce are his cousins.

Officer Picky is just that. Dillan Ruddick is the building super at Stephanie’s apartment building. He’s getting used to putting out fires and repainting Stephanie’s apartment. I’m surprised the owner hasn’t booted her out. Loretta is Connie’s cousin and a nurse at St. Francis. Marjorie Barstock‘s daughter works at St. Francis too. Mrs. Brodksy and Mr. Grezbek are neighbors and take a dog each.

FTAs
Emilio Gardi is facing a racketeering charge and has been considered untouchable.

Jimmy Poletti is a high money bond who is a failure-to-appear. Trudy is the wife who has been with everyone. Aaron is one of his sons and works at the button factory. Oswald is another son who’s not all there. Jimmy’s poker-playing associates include Buster Poletti, his cousin; Ron Siglowski; Bernie Scootch; Tommy Ritt; and, Silvio Pepper, who owns Pepper Trucking. Miriam Pepper is Silvio’s alcoholic wife. Miguel has a message from the Mexicans.

The Russian consulate in New York City
Leo Stochi is a Russian vodka distributor. Sergei Yablonovich is with the consulate. Vlatko, a.k.a., Viktor Volkov, an SVR thug, assassin, and interrogator is at the embassy as a rep for the Russian Ministry of Industry and Trade.

General Semov is high profile and appearing at a vodka trade show in Atlantic City.

The Cover
The cover is a bright explosive grass green of neon blades of grass forming a background for the author’s name in a deep purple outlined in lime green, a shiny narrow band of yellow streaking across the lower end with the series information, and the title in a gradation of pale yellow to white superimposed on the lower half of the cover.

The title is all Ranger and his exploits: Top Secret Twenty-One, and I can’t tell ya how much I appreciate an author who lets me know where I stand in the series chronologically!