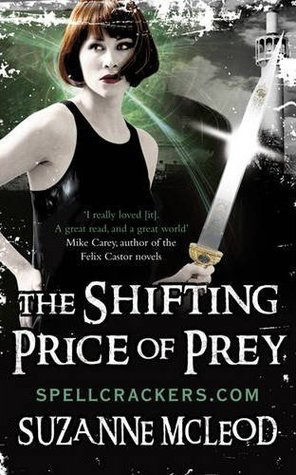 
Fourth in the Spellcrackers.com urban fantasy series based in London and revolving around Genny Taylor, part fae, part human, and part vampire, and totally hunted. It’s been three months since The Bitter Seed of Magic, 3.

There’s no end to the action in this quest, and I found myself wishing I had gotten hold of The Shifting Price of Prey a lot sooner than six years later! There is so much detail I’ve forgotten!! It doesn’t help that a good bit of that detail carries on in this story, and this story is also quite involved and twisty with all that’s happening.

McLeod had me twisting and twining, dipping and ducking…I suspect I was standing on my head numerous times. She keeps the tension up, never letting up on Genny’s suspicions, fears, and worries, providing wee touches of relief. And Genny’s irritating me in this. She’s whining because Finn “doesn’t call, doesn’t write”, and yet she knows his family are being jerks, that time moves differently in the Fair Lands.

I suspect that all this confusion is aided by McLeod using that first person protagonist point-of-view, twisting us up in Genny’s head.

We learn a lot about Malik’s past, and that eventually gets so twisted. It doesn’t help that McLeod is so contradictory about the relationships between Emperor, Empress, Suleiman, the Ikbal, Malik, his parents who sold him out, and the children. Gods, it’s giving me a headache trying to sort it all out!!

There’s a deep and twisty end game playing out, and you won’t know until the end…and I don’t think skipping to the end to find out will help. There’s simply too much — in so many ways — that happens along the way.

The key to returning fae fertility may be known, but it’s only half the battle. It seems there’s another half of the curse that must be found if fertility is to be restored. Genny also discovers the reason for her amped-up sexual frustrations. It seems Finn being gone for so long is not wholly responsible.

To cap it off, the Carnival Fantastique has arrived, as has the wicked auction…with an eminent wildlife activist and her young son in danger.

Lady Genevieve “Genny” Taylor is half-fae, half-human, and, somehow, vampire due to the 3V with which Malik infected her. Her magic is haphazard, but she can see magic and crack a spell. She also carries Ascalon, a Roman magical gladius that cleaves through any- and everything but the innocent. It disappears into a ring until Genny needs it. Rosa had been the vampire body that had merged with Genny’s. Robur is an ancient dryad who lives in Genny’s wardrobe.

Sylvia, a dryad, is pregnant (thanks to the Blue Sapphire), and Ricou, her naiad partner, is ecstatic. They’re living with Genny. They’ve already named the baby after a friend of Genny’s who died saving her. The Ladies Isabella and Meriel are the head dryad and head naiad, Sylvia’s and Ricou’s mothers, respectively. Bertha is a nasty gigantic eel (Ricou’s pet) who guards the rooftop and who keeps trying to eat Genny. Gustaf, a giant squid, is Bertha’s pal.

Spellcrackers.com is…
…a proper company owned by Finn Panos, a satyr and a sex god. Genny’s employer. However, he’s left it in Genny’s hands while he’s in the Fair Lands with his pregnant teenage daughter, Nicky. Dimitris is Finn’s closest brother.

Tavish, a soul taster, is a kelpie, coworker, techno-geek, and friend as well as the àrd-cheann, the top water horse, of London’s fae. Now that the truth about fae fertility is known, Tavish isn’t hitting on Genny any more. Viviane is a leannán sidhe trapped inside the tarot cards by Tavish 241 years ago.

The company’s mission is to aid people and the police in breaking spells. Katie is their part-time receptionist, Genny’s occasional taxi service, and a part-time waitress at the Rosy Lea Café; she intends to be a dancer. Paula is Katie’s mum. Leandra is the witch who monitors the company’s night phones.

Marc is Katie’s current boyfriend. Carlson is his pushy uncle. Shona was Carlson’s mate. Steve Dean was the third shifter.

London Metropolitan Police
Detective Inspector (acting) Hugh Munro, a mountain troll, is about the only copper on Genny’s side. Detective Sergeant Mary Martin is also a witch who is mighty friendly with Sylvia and Ricou. Emily is her nine-year-old daughter. Constable Lamber is another troll. Constable Taegrin is with the Met’s Magic and Murder Squad. WPC Odessa, a.k.a., Dessa, comes along to Trafalgar Square. Peelers are non-magical human coppers.

Detective Inspector Helen Crane had been Hugh’s boss and Finn’s wife; she’s still a witch; and, still on the lam for being dirty. Dr. Craig had been the nutso baby-making wizard partnered up with Helen in The Bitter Seed of Magic. Helen has been having it off with Mad Max as well; Jack is their child who is now one of the Morrígan’s ravens, a sidhe changeling.

The vampires
Oathed to Bastien, Malik al-Khan is the London Oligarch and Genny’s “owner/protector”. Suleiman became sultan and was Malik’s liege and friend. Sanguine Lifestyles is Malik’s answering service. Darien is Genny’s ex-fang pet. The Blue Heart is a vampire club. Janan, Beloved of Malah al-Maut (the Angel of Death), is a silver dagger.

Bastien is the sadistic psychopathic Autarch, the leader of all of Britain’s vampires. He was supposed to marry Genny when she turned fourteen, but she ran.

The Emperor, a.k.a., Romulus Augustus and the last western Roman Emperor in AD 475 is the one who made Bastien. He’s also the Head Fang of Europe. Fur-jacket-girl, a.k.a., Dilek, is a werewolf and sister to Aisha. I think they may be Bastien’s sisters?? Shpresa is said to be Malik’s favoured Ikbal as well as Suleiman’s; she’s also the Empress blood-bonded to the Emperor. She can shapeshift into an eagle and is mother to Bastien and Dilek. And Malik.

The Red Shamrock are one of several vampire blood-families. Their talent is evoking a person’s emotions from memories. Their Irish pub, Tir na n’Og, is quite successful. Declan is the head vampire. Fiona is Declan’s seneschal and human partner.

The witches are ruled by the Witches’ Council.

Mrs. Bandevi Jangali, an environmental activist; her six-year-old son, Dakkhin Jangali; and, Jonathan Weir, the publicity director, were kidnapped from the London Zoo. Balinder Bannerjee is her husband and the ambassador from Bangladesh. David O’Reilly is a zoo employee with a great voice and partnered with Jonathan.

Carnival Fantastique is…
…a way for Others to make a living. Two centaurs offer Heavenly Rides. Mini the Minotaur offers the chase. O’Keefe is a leprechaun who tells the truth. Cupid is the “Divine Love God” who was born a cambion, the result of a witch and an incubus (or vice versa as a wizard with an succubus), which means they’re into sex magic and have a gift for prophecy. This Cupid is quite talented at shape-changing to suit your fantasies.

The Forum Mirabilis is…
…an auction for rare items and invitation-only. Mr Lampy, an accredited conservationist, is a filthy gnome who is also the auctioneer. Mr. Kaito is an international purveyor of rare epicurean delicacies.

Harrod’s is having issues with Magic Mirror spells and is the reason behind Operation Nip Tuck. Obadiah is a Gatherer goblin.

Genny’s family history includes…
…her grandmother, Clíona, a fae queen who had laid the original curse. Genny’s mother, Angel, is a whacko sidhe; her father, Andrei, a vampire, was raped by her mother. Matilde was Genny’s stepmother. Grianne is Genny’s fairy dogmother.

Maxim “Mad Max” Fyodor Zakharin is a vampire, wizard, and Irish wolfhound shifter who is Genny’s uncle on the sidhe side (Angel’s brother) and a distant cousin on the vampire side. He’s also the Autarch’s pet vamp. Brigitta (Angel’s daughter with a fossegrim, the fountain fae guardian at Trafalgar Square) was Genny’s half-sister, and the niece Max had had a fling with; Ana is the daughter Max and Brigitta had. Andrea Freya is Ana’s daughter and Max’s granddaughter who turns into a Norwegian elkhound, is a part fae/human/vampire/sidhe, who needs Genny’s blood to survive.

Dr. Grace, Genny’s friend, had been a part of HOPE, a health clinic. Jacob Sabine, a Victorian naturalist and wizard, discovered the Viagra qualities of dried garden fairy. Sclalter’s Intervention was a bill passed by Parliament in 1902. The Shining Times were millennia ago when sidhe, magic, and the human world first came together. It’s said that Tavish was born then. Between is the space between the Fair Lands and the human world. Sanguine lemurs are revenants used by Suleiman, the skeletons in the vampire closet. Changelings are human babies raised by the sidhe and given sidhe magic. Their places are taken by ùmaidh, a dim-witted dolt made of something inanimate. And Viviane claims Gold Cat is an ùmaidh.

The cover is mostly black from the bottom up as it merges into Genny’s tank top and part of the forested background. Genny is obviously on the move, heading to the right, but her head has swung back, her pageboy haircut with the ends flipped under, swishing across her cheek. One hand is braced on her hip and the other holds her sword, Ascalon. In the background, there’s the green flare of magic behind her, and a lighthouse in black-and-white on the right. The title and author’s name is in a gothic textured white while the series information, nestled between the two, is a subdued green.

The title can apply to so many possibilities, and I suspect The Shifting Price of Prey is all about Genny, what she hopes for, what she fears, what she must achieve.

2 responses to “Book Review: The Shifting Price of Prey by Suzanne McLeod”