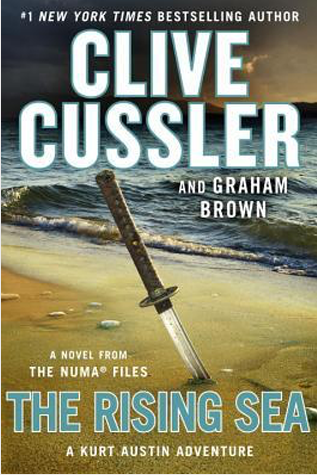 Fifteenth in the NUMA Files action thriller series and revolving around Kurt Austin and Joe Zavala, a pair of troubleshooting good guys.

It’s a political greed to be top dog that threatens the world with a futuristic technology. On the flip side, there’s a fascinating reveal on a small group who are anti-e-tech, which comes at an interesting point in our own time, what with identities being stolen from Facebook and others. Then I took a leaf from Kurt’s observations…and yeah, I do carry quite a bit of “junk”. Hmmm…

I certainly felt a shiver rush over me when I read of the electronic shutdown in Shanghai! Eek. And, lol, there’s plenty of James Bond-type moments, such as Paul and Gamay’s efforts to get the data out to America! Whew. Got to thinking Mission Impossible as well with Kurt, Joe, and Nagano’s flight off the island. Oy…these boys know how to live it “up”, lol.

On the technical side, The Rising Seas uses a multiple third person point-of-view, as Cussler/Graham are providing perspectives from a range of characters on both sides of the conflict.

A metaphor at the start compares America with the game of Go, as an interesting lesson for Han. That’s followed up with the twist at the end that raises up shades of a Terminator-style world! Sure hope they cut those batteries!

As usual, Cussler/Brown combine plenty of action with several storylines, all of which blend together along the way with an enemy who attempts to use Kurt and Joe as their very own red herrings. You’ll definitely want to be flippin’ them pages!

A battle between politicians and scientists is cut short with Kurt Austin’s dramatic entrance. With more stunned silence when Austin proclaims the truth of the global melting, the waters rising, the flooding threatening the coastline.

It’s a truth that sends Kurt Austin, Joe Zavala, and the rest of the NUMA scientific team rocketing around the globe in search of answers. What they find at the bottom of the East China Sea, however, is even worse than they imagined — and part of a diabolical plan to upset the Pacific balance of power — and unexpectedly displace as many as a billion people.

A rare alloy, a pair of five-hundred-year-old Japanese national treasures, an assassin so violent even the Yakuza has disowned him, an audacious technological breakthrough that will become a very personal nightmare for Kurt Austin — action that ranges from the shark-filled waters of Asia to the high-tech streets of Tokyo to a forbidden secret island — the NUMA team must risk everything to head off the coming catastrophe.

Kurt Austin, Head of Special Projects, and Joe Zavala, an engineering genius, are partners who work for NUMA.

NUMA is…
…short for the National Underwater and Marine Agency, whom many on Capitol Hill consider a cowboy organization. NUMA monitors the world’s oceans and America’s lakes, rivers, and waterways as well as historical work. Paul Trout is a geologist specializing in deep-sea studies and married to Gamay Trout who is a marine biologist. Rudi Gunn is the assistant director; Dirk Pitt is the director. Hiram Yaeger is the resident computer genius who designed Max, a unique computer with a sense of humor. Robert Henley is a marine geologist under Paul. The brilliant Priya Kashmir is restricted to a wheelchair, but that is her only restriction.

Vice-President Sandecker used to be director of NUMA.

Greenland is…
…but one frigid land that Kurt visits. Vala is a Norwegian geologist who helps out on the Navik Ice Sheet.

The Serpent’s Jaw is…
…a canyon in the East China Sea off Shanghai where an underwater mining operation is located. Dr. Chen and Commander Hon Yi of the People’s Liberation Navy are the only human operators. Golden Adamant (GA) is a new, very rare alloy. Wen Li is small and very old, but only physically. Politically, he’s Lao-shi, an old person of high skills, a major powerhouse in China.

Walter Han is über wealthy and a powerful man in China and Japan. Industrial Technology, Inc. (ITI) is the business his father built. Gao-zhin is their best engineer and slides into Han’s new company, China-Nippon Robotics. Ny-Nex is a female automaton you’d never know was a robot.

Shanghai
Melanie Anderson is the reporter for INN, Indie Network News, that thrives on conspiracy theories. Charley is her cameraman. General Zhang (Nighthawk, 14) is based at the Ministry for State Security.

Japan is…
…a target, a US ally. Superintendent Nagano is in charge of the Yamana Police Station. Honshu is an island abandoned some years ago.

Kenzo Fujihara is a Japanese geologist who eschews electronic technology. Akiko is one of Master Kenzo’s students and considers herself his bodyguard. And does she ever have the fascinating past! Ogata is on another station. Ichiro is one of Kenzo’s earliest followers.

Ushi-Oni, a.k.a., Oni, loves to kill and defected from the Yakuza, a ronin, and a cousin twice-removed from Walter Han. Hidekai Kashimora is a Yakuza underboss who runs Sento, a gaming, drug, and prostitution establishment that includes a combat arena.

Sergeant Coldy Bimore received a precious shipment. Iemasa Tokagawa was the latest in his family to protect priceless katanas, including the Honjo Masamune.

Masamune was Japan’s greatest swordsmith and he created the Honjo Masamune. Muramasa was Masume’s envious protégé who created the bloodthirsty Crimson Blade. Both blades became national treasures, and then they disappeared.

Ringwoodite is a stone that traps water.

The cover is a complement of dark blues versus an orangey yellow in a dark roiling sea with its waves rolling up on the golden beach, a leather-wrapped katana sunk into the sand. The primary author’s name is at the top in an embossed white outlined in a metallic light blue — the title is in the reverse colors, embossed, and at the bottom of the cover. The secondary author’s name is very small in a gray to the bottom right of Cussler’s name. There’s more gray in both bits of series information while the info blurb is at the top in white.

The title is the fear, a future of The Rising Seas drowning the world.

3 Responses to “Book Review: The Rising Sea by Clive Cussler and Graham Brown”