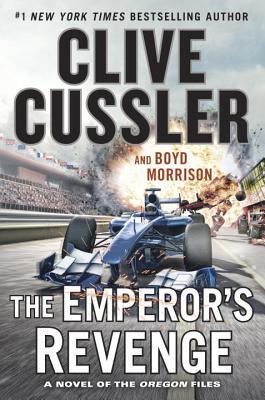 Eleventh in The Oregon Files series and revolving around The Corporation, a covert ops team sailing the world on a converted freighter full of hidden tricks.

This is the story which crosses with Kurt Austin and Joe Zavala in Malta during the warehouse shoot-out in The Pharaoh’s Secret, 13.

I enjoyed this typical Cabrillo and The Corporation story with its terrifying and exhilarating action — especially the one where Zakharin reveals way too much!, undercover scenarios, rescues, escapes, and more. It was quite the James Bond-like story with its über villains and worldwide destructive plans.

What I don’t understand is how the robbery thing worked. It’s too complicated for me. If it’s all online, I would have thought the bank would have backups. That idea was difficult enough to understand, then Morrison started introducing new “treasures” every few chapters that the bad guys were reaching for, and I got even more confused. It was as if Cussler–Morrison couldn’t decide what the end was supposed to be, and it kept moving. I never did understand how that final target was supposed to give them all those billions of dollars. Maybe because it all kept changing.

It’s all about the money, starting with the prologue which refers to a fictional escape of Napoleon from St. Helena in 1821 as the basis for that final treasure the Achilles crew is after. An escape that is its own betrayal. And a clever use of the arsenic believed to have killed Bonaparte.

It’s that brilliantly executed bank job that will turn your stomach, setting up how awful the bad guys were. Meanwhile, the initial undercover op the Corporation is on gets very exciting as well, especially that spectacular escape. Nor is that the only death-defying escape for the team.

It was a mean tease about Gretchen… And even meaner what Golov and his people plan for Napoleon’s treasure! All that history!?!?!

I’ll confess that I do love the thriller aspects of The Oregon Files series, AND I adore all the gadgets as well as that incredible contrast between the Oregon‘s exterior and its interior. The characters also contribute; I adore Cabrillo as well as the rest of his crew. Their compassion and skills along with their sense of humor pull me right in. It’s too bad the storyline was so complicated and confusing.

Dynamo is the plan filled with betrayals, and it begins by wiping out the accounts where The Corporation has its assets. A major mistake for it sets The Corporation and Juan, along with an “ex-wife”, to track down the hackers responsible.

It’s a trail that snakes around Europe to the yard where the Oregon was created, an auction in Malta, blackouts in Germany, and the hunt for a missing emperor.

Chairman Juan Cabrillo is the leader of the Corporation and captain of the Oregon. Speaking three languages, a former CIA agent, he will become Blake Charles from Columbia Mutual Insurance.

The Corporation does…
…work that the U.S. can’t do directly. Each member of the Corporation is a partner and each gets a share of the profits. Tiny Gunderson is their fixed-wing pilot; George “Gomez” Adams is their helicopter and UAV pilot. Eddie Seng, also former CIA, is the chief of shore operations. Franklin Lincoln is a former Navy SEAL. Max Hanley is the chief engineer, second-in-command, and a former Vietnam War Swift Boat commander. Kevin Nixon is in charge of the Magic Shop where they create the disguises, false IDs, and any necessary made-to-order equipment. A fully staffed medical bay with operating theatre is headed by Dr. Julia Huxley, a Navy-trained medical officer. Linda Ross is the vp of operations, is third-in-command, and had served on an Aegis cruiser and as a Pentagon staffer. Hali Kasim is the communications officer. Maurice is the chief steward, a veteran of the Royal Navy. Mark Murphy, an MIT graduate and a top weapons designer, and Eric Stone, a former naval officer in R&D, are their computer experts and research specialists. Mike Trono had been a pararescue jumper in the Air Force. Marion “McD” MacDougal Lawless is a former Army Ranger.

CIA
Langston Overholt IV is Cabrillo’s former boss and the CIA liaison with The Corporation. Gretchen Wagner is a forensic accountant embedded with Interpol who speaks seven languages and is Juan’s ex-wife.

Monaco
Henri Munier is president of the Credit Condamine bank where most of the Corporation’s assets are deposited. Georges Petrie is its vice president, known for elaborate pranks. André and François are guards at the bank. Chief Inspector Rivard is with the Monaco PD. Marie Marceau is the Sûreté’s top computer analyst.

The Maltese Oceanic Museum in…
…Malta is hosting an auction. Emvin Spadaro is with the museum. Arturo Talavera is the director. Manwel Alessi is the harbormaster in Malta.

David Kincaid is fascinated by a plane. Marcel Blanc is the director of a cybersecurity firm, Relvat Security. Beatrix Dräger is manager of the Continental Control Hub.

The Dijkstra empire is all about…
…shipping and manufacturing and owned by Lars and Oskar Dijkstra, brothers. Gustaaf Dijkstra is Oskar’s son. Yvonne is Gustaaf’s assistant. Niels is his cousin and working in Singapore. The Narwahl is one of their containerships with Cobus Visser and Gustaaf Bodeker as part of the crew and the only survivors.

The Achilles is…
…one of the largest yachts in the world and is owned by the extremely wealthy Maxim Antonovich. Ivana Semova is Antonovich’s personal secretary and computer expert. Sergey Golov is the captain and formerly a captain of the Ukranian Poltava. Dmitri Kravchuk is his executive officer. Two of Antonovich’s most trusted security operatives include Seamus O’Connor, a veteran of the IRA and a weapons expert, and Sirkal, who heads up security; Jablonski and Monroe are more operatives. Pavel Mitkin is a crew member who didn’t agree with the plans.

The Saharan Islamic Caliphate is…
…a terrorist organization planning a fundamentalist state in North Africa whose benefactors are based in Saudi Arabia. Mahmoud Nazari is its leader. His team includes the unlucky Hasim.

Shadowfoe is a notorious hacker. Whyvern is the hacker’s nemesis. Alexei Polichev was a mathematician.

Dalmat Simaku is…
…a businessman who bought Vlorë Castle and is thought to be one of the biggest crime bosses in the Albanian mafia. Erion Kula is a computer hacker with four children and an aunt held hostage.

1821, St. Helena
Lieutenant Pierre Delacroix is in command of the submarine, Stingray. Yves Beaumont is an experienced alpinist. François Robeaud is the double for Napoleon Bonaparte, the conquered emperor imprisoned on St. Helena. Joseph Fourier had been Napoleon’s science advisor. Jacques Aubuchon was a wealthy businessman.

Primorskiy Kray Naval Base near Vladivostok has…
…a covered dry dock which customizes ships on the sly. The current base commander is Admiral Nestor Zakharin who took over from Juan’s friend Yuri Borodin.

The cover is pale in its summer sky and the gray of the racetrack. Front and center is a stripped race car with flames blossoming behind it with a helicopter and people flaming out. On the left are the race stands while the right has the glassed-in overhead viewing. The largest text is black outlined in embossed silver of the inspiring author’s name. Next is the title in white with a black embossed outline, then the actual author’s name tiny and in a deep red.

The title is The Emperor’s Revenge, which was a long time coming.