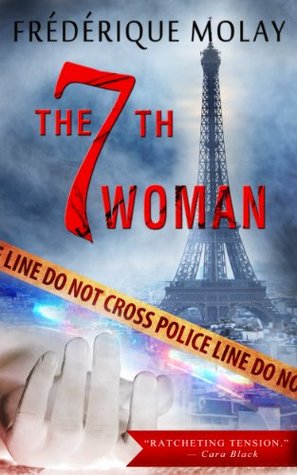 There's no rest for Paris's top criminal investigation division, La Crim'. Who is preying on women in the French capital? How can he kill again and again without leaving any clues? A serial killer is taking pleasure in a macabre ritual that leaves the police on tenterhooks. Chief of Police Nico Sirsky—a super cop with a modern-day real life, including an ex-wife, a teenage son and a budding love story—races against the clock to solve the murders as they get closer and closer to his inner circle. Will he resist the pressure? The story grabs you by the throat and doesn’t let go until the last page, leading you behind the scenes with the French police and into the coroner’s office. It has the suspense of Seven, with CSI-like details. You will never experience Paris the same way again!

In 2007, The 7th Woman won the Prix du Quai des Orfèvres for best crime fiction and Best Crime Fiction Novel of the Year from Lire Magazine.

My Take
I was underwhelmed, and The 7th Woman is the second French translation I’ve read within a month which has not impressed me. I’m beginning to think it’s a case of writing style: French versus American. American style places an emphasis on show, pulling the reader into the story by appealing to the reader’s five senses of taste, touch, smell, sight, and hearing with an emphasis on integrating background information into the story. The French style — and do keep in mind that this opinion is only based on my having read two French thrillers! — keeps it clinical with “just the facts” and, oh lordy, lots of info dumps.

Not being pulled into the story makes it much easier to remain detached from the fate of the characters, to not feel the tension. That’s not to say that Molay didn’t create tension. Instead of show, Molay uses chapter headings and pacing with shorter, almost staccato-like sentences to create a sense of worry and fear. I don’t feel this is as effective as show, but again, this is just my opinion.

Info-dump-wise. I hate them. They pull me out of the story. I feel as though I’m being lectured at. Molay also tends to write “lists”. I don’t know if it’s Molay’s style or if it’s a result of Anne Trager’s translation, but I cannot believe that real-life characters would offer up this much information in one paragraph. In paragraph after paragraph after paragraph. Perhaps, again, it’s a style issue. A difference between American and French, but an exchange such as the following simply doesn’t ring true.

”’I’m sure that is true, Thank you for seeing me. The coffee was excellent. That’s rare in a public institution.’

’I buy it myself. That’s my secret. Don’t hesitate to let me know if you need anything else…’”

Huh. That’s my problem. It’s robotic. Of course, there are other conversations that are simply dorky, such as the scene in which Nico is trying to find out when Dr. Dalry finished work and the nurse has such a nasty comeback.

Don’t get me wrong, Molay was quite clinical in her descriptions of the autopsies, making the details sound quite accurate, and it was interesting to read how Parisian investigations differ from how American ones are conducted.

Argh, a touch of the stupid trope in which one of the potential victims gets stir crazy and knows she’ll be just fine…! I hate those. And, yup, another example of why parents need to be licensed! Yeah, I know, you can make a child’s background anything you like in fiction, but I’d be curious to know if statistics bear this out.

I liked her characters; however it was a detached appreciation. I don’t feel any great urge to read on to the next in the series, Crossing the Line, to find out what happens to them, how their lives continue. Nico is very real with personal family problems, although his interaction with Dr. Dalry felt stiff, and lol, no! That is not what I meant!

Molay did keep me guessing until the end, partly by keeping me in suspense as to which character she was writing about. I hate having to backtrack to figure out who might be the principal character in a scene. I can see where in some instances it adds to the suspense, but there were others where it was merely irritating.

Molay raises a good point about our current time and our lack of attention to our surroundings. We are too preoccupied with our own lives. How many of us even know our neighbors these days? Who gets involved in finding out if people are hurting? Of course, it doesn’t help that governmental regulations are getting tighter and tighter. That we’re terrified to “interfere”!

The way this guy gains entry. Each instance is different, but it all boils down to the same things, he’s invited in, in circumstances I can see myself inviting someone in. We’re raised to be too polite. To be too concerned with how others see us. It’s not a bad thing, but it does need to be tempered by commonsense. Beware the good Samaritan!

What’s with the comment about the Barteses having this big table so obviously they like to entertain? No. Put some thought into this. Ease it in naturally. Then there’s the statement Vilars makes before she even starts on the third victim about the extra body parts belonging to the second victim. Cops and forensics people are supposed to stick to the facts, get proof, which would lead me to believe that, sure, Vilars suspects those parts do indeed belong to the second victim (god knows I think so too), but she wouldn’t state it as fact! Arghhh. Oh, please. It takes Dr. Robin noticing that the knots are the same from the first victim to the second to determine that, hmmm, these crimes may be connected, when they’ve already figured out that the killer is using the first victim’s body parts on the second? And, he’s using the exact same techniques? I’d be worried about the ability of the police to detect. Oh, boy. I can see where Sylvie found Nico a problem. He actually “cared about her well-being”, *eye roll*. Then there’s Becker’s own eye roll about “barstool psychology”. How long has he been in charge of investigations, and he’s never seen this technique before?

This one is in response to being asked if the character has children:

”No, I have dedicated my life to medicine, studying for many years and fighting my way up the ranks.”

Nice bit about the history of the French police.

Why didn’t Becker come forward when they got the article? What’s with Vilars getting so angry simply because Fiori chose to stay late to catch up on paperwork? Now, wait just a minute. Vilars believes she should tell the families of the victims the “tiniest, most horrible details” of how their loved ones died? Nico spends time trying to catch the last victim’s eye when she’s provided a distraction? How professional is this guy?

I’m with Molay on this one: “Your past does not excuse or justify your actions. All it does is explain them.”

The Story
A brutal murder has Nico Sirsky and an increasing number of teams on the go, struggling to beat the killer to his next victim, for he has promised “seven women in seven days”. La Crim’ is desperate to find him. Stop him.

The Characters
Nico Sirsky is a divorced professional, a young chief of police heading up the most prestigious criminal investigation unit in France, La Crim’, more formally known as the Paris Criminal Investigation Division. He shares custody of his son, Dimitri, with his wife, Sylvie, a very depressed, delusional woman. His solicitous younger sister, Tanya, is married to Dr. Alexis Perrin, and they have two children. Anya Sirsky is their Russian émigré mother.

Dr. Caroline Dalry is a professor of medicine, a gastroenterologist, and a former Paris Hospitals chief resident.

La Crim’
There are twelve squads with six men each. Commander David Kriven is the head of one of the twelve squads; his boss is Deputy Chief Jean-Marie Rost. Pierre Vidal is on the squad. Commander Jöel Théron heads up another team. Commander Hureau took the call on the third. Captain Amélie Ader is a bright, up-and-coming police officer; she’s married to Maxime.

Police Commissioner Nicole Monthalet. Deputy Police Commissioner Michel Cohen appears content with his current position with law enforcement; Nico is his protégé. I’m not sure I like him. He seems to be a bit of a jerk with his comment about “the lesser sex”, which he follows up with that lame apology.

Dominique Kreiss is a criminal psychologist, a profiler specializing in sexually related murders; she’s seeing Rémi, a veterinarian. Lieutenant Schreiber is on the ball. Alexandre Becker is the magistrate in charge of the case. Bastien Gamby is their best computer specialist.

The Institut Médico-Légal is the morgue where Professor Armelle Vilars is in charge. Dr. Eric Fiori is one of the assistants under Vilars. Marc Walberg is a forensic specialist in handwriting. Dr. Tom Robin will examine the knots. Professor Charles Queneau is in charge of the forensics lab. Erwen Kellec is a botanical specialist in phanerogams, who works at the National Natural History Museum.

Marie-Hélène Jory was an assistant professor of history. Paul Terrade, her partner, works in a bank. Dr. Jacques Taland is Jory’s doctor. Françoise Pasquier is the dean at the Sorbonne. Anne Recordon and Chloé Bartes have been friends forever and have a comfortable lifestyle. Gregory Bartes is Chloé’s husband. Florence Glucksman has picked up a lovely negligee that matches her eyes. Valérie Trajan is married to Daniel. Isabelle Saulière is a nurse at the hospital who is married to Victor. Arnaud Briard was seven years old when he killed his mother, Marie.

The Élysée is the equivalent of our White House.

The Cover
The cover is a stormy mix of blues with the Eiffel Tower in the background. The author’s name is in black at the top while the title is in a textured red just beneath. Under the title a yellow crime tape is angled across with winter-white hands cupped and facing upward. I’m not sure what the iridescent effect is meant to be just under the crime scene tape. I’m wondering if the crime scene tape is a metaphor for the police’s emphasis on how pristine their crime scenes are in this?

The title is the most crucial victim of all, The 7th Woman.

2 responses to “Book Review: The 7th Woman by Frédérique Molay”