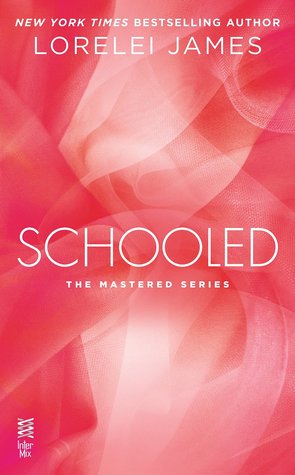 "Schooled" by Lorelei James
Published by Intermix on December 2, 2014
Pages: 113
Source: the library

When Amery Hardwick first met martial arts master Ronin Black, she wasn’t ready for the level of his sensual artistry—or his need for extreme control. Nor was she prepared for the primal urges it released in her. Amery and Ronin were made for each other.

When they married they were certain their future would be a fulfilling journey of love and passion. But happily ever after is never so simple. Six months later, while in Japan, Ronin is training with his sensei, while Amery is consumed by her own burgeoning career—and a culture shock with which she is struggling to adapt.

Now, from the heady pleasures of Tokyo bondage houses to the unyielding family traditions pulsing with every beat of Ronin’s heart, Amery and Ronin find the limits of their relationship tested once again, and shocked to discover what they’re willing to do in order to save it.

Also by this author: Wrapped and Strapped, Unraveled, What You Need, Just What I Needed, Racked and Stacked, Hang Tough, Spun Out, All You Need, When I Need You

A short story in the Mastered erotica romance series, 2.5, and revolving around Amery Hardwick and Master Ronin Black in Denver and Japan.

It starts out as such a lovely fantasy…sigh…a plane with a bedroom and a well-appointed bathroom. A far cry from steerage in today’s planes. And useful too since there is a lot of sex in this. In some respects, it seems as though James has strung story simply to connect their bouts in bed, and yet it is well strung and allows the point of the story to unfold.

Ronin’s reaction to his grandfather’s first questions is not what I was expecting. Seems he’s growing up. Nor am I the only one who has noticed this. Amery is also growing as she becomes more comfortable with the idea of public rope play. It’s completion and beginning for one and the other.

It’s also a combination of honeymoon, playing tourist, and learning Japanese while exploring Japanese culture for Amery, who quickly becomes so incredibly bored. Contrast that with the grueling training that Ronin is undergoing with his sensei. And I’m exhausted.

It’s a training that has a bittersweet reveal at the end of it. One which requires understanding and acceptance.

From the heady pleasures of Tokyo bondage houses to the unyielding family traditions pulsing with every beat of Ronin’s heart, Amery and Ronin find the limits of their relationship tested once again, and shocked to discover what they’re willing to do in order to save it.

Amery has been married to Ronin Black, heir to a billion-dollar corporation and master of many martial arts as well as a master of kinbaku, for the past six months.

Daichi is Ronin’s sensei in Japan and the man who teaches “traditional Japanese jujitsu in its purest form”. Yasuji is Daichi’s brother and bakushi, Japan’s most renowned kinbaku and shibari rope in-command, bmaster; he has been Ronin’s rope instructor. Rikya is Yasuji’s wife. I had been expecting to meet Masaman, whom James stated was Ronin’s sensei in Japan in Unwound, 2, but I guess he was out sick.

Shiori Hirano is Ronin’s sister. Jenko is her bodyguard. Nureki “Ojisan” Okada is their horn dog grandfather, and the head of Okada Foods. Tamara Okada is Ronin’s mother. Inichi Matso.

Bakushi Iggy claims to be a rope master and is performing at Go, which is owned by Go-jen.

Amery still has her graphic design company, Hardwick Designs, with the shy Molly Calloway now her office manager and new graphic artist. It’s possible that Presley Quinn is the new artist, but it was difficult to tell from the text. Cherry Starr writes erotica and loves the covers Amery did for her trilogy.

Ronin’s dojo is in the hands of his second-in-command, Knox Lofgren. Yondan Deacon McConnell is Ronin’s third, and Molly claims he’s being a sadistic instructor. Katie “the Kook” Pettigrew Gardiner, Thaddeus Pettigrew’s baby girl, is still working at the dojo while Ivan the Terrific, Max Stanislovsky’s son, is working hard. Badass Blue is Ronin’s new partner, a master at Brazilian jujitsu.

Mark Beauchamp and Bernie Samuelson are their pilots. Nick is the flight steward. Carver handles their luggage.

The cover is a soft flutter of deep pink ranging to pale, pale pink chiffon scarves suspended in mid-air.

The title is not what you’d think for a story of erotica, instead “Schooled” is about the lessons that Amery and Ronin each learn on this trip to Japan.