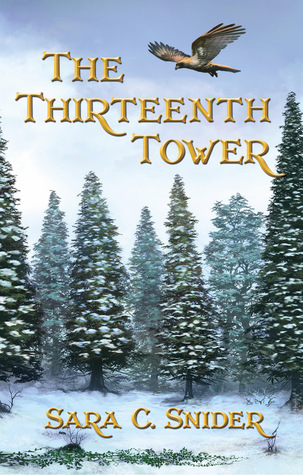 In adversity lies strength beyond imagining.

Abandoned as a baby, young Emelyn’s life as a housemaid in the quiet village of Fallow is unremarkable—and empty. That is, until a host of magical creatures arrives and inflicts terrible misdeeds on the townsfolk. Inexplicably immune to their enchantments, Emelyn joins a pair of Magi intent on stopping the cause of the trouble—and who claim to know of her parents, promising Emelyn answers to a lifetime of questions.

But the answers Emelyn seeks prove to be more elusive than she hoped, and the world outside Fallow more perilous than she imagined. Magical creatures roam the land over, attacking yet another town before coming after Emelyn. The key to her survival—and finding her family—lies deep within her, if only she can conquer her doubts and believe she is more powerful than she ever dreamed.

I suspect this is the first in a new fantasy series for middle grade readers, and it revolves around Emelyn.

This ARC was provided by NetGalley and Double Beast Publishing in exchange for an honest review.

My Take
Snider manages quite a lot of information in a short time as she introduces us to Emelyn’s world. One in which she indulges in all the usual daydreams of an orphan, hoping to one day find her family and learn that they hadn’t meant to leave her so long. Snider certainly kept me wondering for the longest time about Corran and the barefooted girl, and when the truth emerges, you just want to weep.

She’s included a unique twist on what I consider the fae in the form of the forest people and a horrible twist on the Magi to whom all must be reduced to rote formula. It’s actually a very good example of show, as Snider’s Magi ignore or lie about what they don’t want to discuss, and Snider uses the fear Emelyn feels about them and Corran’s suspicions to build in the tension.

Only we don’t know any of this for sure. We suspect, we wonder. We hope. Meanwhile, the Magisters know how to entice Emelyn to accompany them on their journey. It’s the core of the conflict in this story, and Snider is not shy about adding more and more of it. Teases from Snider, baiting from the Magisters, and the taunting appearances of Iyen. The Magisters’ conversations, Corran’s comments all serve to keep you glued to The Thirteenth Tower.

When they abandon Corran, I don’t get the logic that they’ll encounter him later on their journey. Okay, never mind. It’s like much in The Thirteenth Tower with the Magisters. They give out as little as possible. I fear them, that they look to trap their prey. It’s that vignette at the Thirteenth Tower that finally proves their arrogance, their stupidity. Jeez, I can’t believe how blind, ignorant, and one-sided Percival is. There should be a balance between learning and discovery — it feels like a metaphor for man and his science, and these Magisters make me think of those Nazi doctors willing to do anything to their captives for the answer to any of their perverse questions.

Oh, I did love Iyen’s revenge, their own shades offering up the same words of “comfort”.

It’s a journey that will open the world to Emelyn.

The Story
It could have been worse, and it could have been better. At least Emelyn has a place to sleep and food to eat. For today, she’s looking forward to getting her chores done so she may attend the Harvest Festival.

It’s an unexpected parade of all sorts that pulls her out of the Mansell yard, for it’s the neighbors, the Mansells, their neighbor Mrs. Bower, the servants all skipping and gadding along following a fiddler playing a twisted branch.

It’s the information Emelyn has sought her entire life that decides her to follow the Magi, and it will be a road of unexpected adventures and even more unexpected truths.

The Characters
Emelyn is an orphan left on the doorstep of the Mansell residence in Fallow. Later, Cobbe will call her Silver-eyes and Corran she will name Hollow-man.

Corran is a protective young man who appears out of nowhere and rescues Emelyn. He used to apprentice with Mr. Wainwright some years ago, although he came from Tirenfor where the Magi did not exist and his people celebrated the old ways. Iyen is the wife the Magisters took from him as he fled with their daughter, Siyan.

Magisters and Towers
Magi/Magisters are magic users. Cocky, “science”-oriented, singleminded men who came from the south. They pushed ever northward building their Towers. “Civilizing” the barbarians and bringing enlightenment. The Magisters of the past were Hauer and Jennison.

Roelith is a bustling mini metropolis up in the north.

Cobbe is a Wylkin and was in the city trapping falcons for dinners. They are renowned as fantastic cooks, but are rarely seen as they seldom leave their forest homes. Amongst the Wylkin, a Den Mother is their leader, drawn from the Wildings, the female Wylkin who leave their villages to travel and explore. Bog is the second Wylkin Emelyn meets.

Beryl Royen is the kindly innkeeper with her husband and son. Ferrin is the name Emelyn gives the donkey they buy. Werren Worsby is a trader they encounter.

Fallow, the village
Derron is a boy Emelyn is sweet on. Mr. Hibberly runs the general store; his wife, Mrs. Hibberly, is quite critical. Mr. Cowan sells meat pies and ale. Mr. Gatwick is the dairyman whose wife will be selling butter, cream, and cheeses at the festival. Mrs. Troller sells her apples and preserves. Mr. Torvel is the alchemist, and Mrs. Gristman would never agree to what they were doing to her. Patrice is a servant girl from a neighboring household.

Mansell
Torrence Mansell is the master. Miss Merridan Cook is the household cook; the housekeeper is the one who took Emelyn in and raised until she was ten when she was put to work. Tilly is her dearest and only friend and another housemaid. Mr. Witherby is the gardener?

Lamphyr are a sea-folk superstition of men without eyes holding lanterns. The Art is the magic and using of it whether through the Natural or Constructed runes. Threshing is a test all potential Magi undergo and it exacts a heavy price. The forest-kin have great power but wield it in everyday tasks. The And’estar are their wise ones.

The Cover
The cover is beautiful with its tall pines dusted in snow as the rescued falcon flies overhead.

The title is the key to their secrets, The Thirteenth Tower. It holds the truth about their dirty deeds.