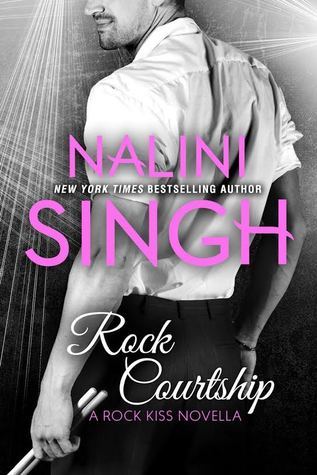 A novella, 1.5 in the Rock Kiss cozy romance series, revolving around a rock ‘n roll band. The couple focus is on David Rivera, the drummer, and Thea Arsana, their publicist.

It’s a nice bump for David. From a short, skinny kid who couldn’t get a girl to look at him, to a rock star who can’t shrug ’em off. But he’s still a cool guy. While it’s been four months since David asked Thea out, Rock Courtship takes place during Rock Addiction, 1, when the band does the charity concert in Sydney. And we get his account of that fight in the bar. Even better, lol, we get a perspective from the bar owner. Oh, yeah…!

We also get insight into David’s family and how amazing they were…and are. Those insights into David’s back history are too heartwarming. The care packages his mom sent to him. His dad’s and mom’s sacrifices to ensure their kids got what they needed.

It’s through this third person dual protagonist point-of-view that we also learn how fed up Thea is…and why. Hmphh *laughing* it’s her own fault. Of course we also learn Thea’s mom’s back history. And yet another heartwarming background. It’s one that leads Thea to yet another uplifting encounter when she wants to know the other side of her medical history.

And then there’s Molly’s idea for David to romance Thea; now that’s a strange courtship. Almost as strange as Wayan’s idea of romance in buying his wife a shovel! Does he know her or what!?

As for the tidbit when Abe and David reminisce over the, ahem, song that brought the four boys together at a choir try-out…oh, lol. That brotherhood held through so much. Wait’ll you read about their playing weddings! It’ll make you cry!

“When you suffer such a big hurt, the longer you permit it to live in you, the bigger it grows, until it seeks to devour your soul.”

Hmmm, that climax… Not what I would have expected, and it felt contrived. Annoyingly so.

It’s definitely a character-driven story with, ahem, memorable action, lol, although the pace feels rather slow.

And yet, I do like, a strong man who admires a strong, giving woman:

“I find it arousing as hell when you rip some … tabloid reporter to shreds, all icy and polite.”

David may be a god on the stage and in writing songs, but he’s hopeless when it comes to Thea Arsana.

Thea Alice Arsana owns a public relations firm and has a number of clients. Imani is Thea’s best friend and business partner and married to a surgeon. Lily is Thea’s mom and an amazing horticulturalist in Bali, who, in her youth, had worked as a maid in New Zealand for Patrick and Karen Buchanan. Wayan, Thea’s stepfather, is her real father. Marjorie and Ella are her younger half-sisters. Molly Webster is also Thea’s half-sister.

David Rivera, a.k.a., the Gentleman of Rock and the man who makes the band a family, is the band’s drummer, a brilliant yet poor boy who got the scholarship that set him on this path. He’s also a good cook. His family is terrific and based in the South Bronx where his father, Vicente, is/was a construction worker, his mother worked as a cleaning lady. His two younger brothers include the very decent Zeke.

Schoolboy Choir is…
…the rock ‘n roll band. The other members — who are also brilliant — include Zachary Fox, who is the lead singer (Molly is his girlfriend; Rock Addiction); the smart blade of a guitarist who can mimic other singers Noah (from a rich family); and, the newly divorced Abe, the keyboardist from another rich, rich family.

Jack wrote an Oscar-winning song; his high school sweetheart of a wife, Valerie, is a make-up artist. Gerald and A.J. are socialite friends in New York who love to give parties. Esteban is a pop singer and a friend of the band’s. Hmm, Thea knows someone named Jeth. Bailey is part of Schoolboy Choir’s legal team.

Eric is Thea’s jerk of an ex, an executive of a business that had hired Thea. Will Taylor, a country music star, is an idiot. Naomi Hughes is a friend of Zeke’s. Juan Ortez is her boyfriend.

The cover is a black-and-white photograph with David’s back to us, his face turned to the left, drumsticks in his left hand, and wearing a button-down shirt with the sleeves rolled up and black suit pants. The backdrop looks like a chalkboard with straight lines crisscrossing all over it. The author’s name is a bright purplish pink with a wide shadow that crosses the middle of David’s back. Between her first and last names is an info blurb. The title is in a white script across his backside with the series information below that in the same pink.

The title is an unusual wooing, a business-like Rock Courtship.