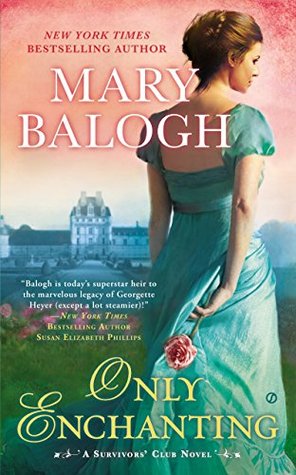 Only Enchanting by Mary Balogh
Genres: Historical Romance
Published by Signet on October 28, 2014
Pages: 394
Format: eBook
Source: the library
Buy on Amazon
Goodreads
Also by this author: Simply Unforgettable, The Proposal, The Arrangement, Only a Promise, Only a Kiss, Only Beloved, Someone to Love, Someone to Hold, Someone to Wed, Someone to Care, Someone to Trust, Someone to Remember, Someone to Honor

Fourth in The Survivors’ Club historical romance series (and loosely connected to the Bedwyn Saga series) revolving around a group of men and one woman who survived the war against Napoleon. The couple focus is on the widowed Agnes Keeping and Flavian Arnott, Viscount Ponsonby. It’s been seven months since the end of The Arrangement, 2.

In 2015, Only Enchanting won All About Romance Annual Reader Poll for Best Historical Romance Set in the U.K. and received an Honorable Mention for Most Tortured Hero.

An exploration of truth, fears, and reflection finds both protagonists suffering from their own version of PTSD, which Balogh described through third person dual point-of-view. Ponsonby’s was a result of war while Agnes’ is because of her parents’ divorce.

The PTSD is a two-pronged effort as Ponsonby struggles with his memory issues and the past that dogs him and sees into the truth behind Agnes’ fears. Agnes’ thoughts are more along the lines of low self-esteem, disbelieving in Ponsonby’s interest in her. And man, is she quick to believe the worst!

The story is certainly different with Ponsonby’s approach to Agnes at the Middlebury ball, and I loved how thoughtful and considerate Ponsonby was, in his own fashion, lol.

While this dance of a courtship makes me somewhat nuts, it is a realistic one. For the time period, Agnes would not have expected Flavian’s attention, and I can understand why she is leery.

I CANNOT believe how incredibly rude Ponsonby’s mother and his sister are!! And how incredibly naive they are. Admittedly, Balogh really stretched out the teasing about the past as far as the truth behind Flavian, David, and Velma’s interactions as teens. It’s that past and Velma’s ambitions that explain the bitchfest that results from Ponsonby’s marriage, hoo boy. Balogh was also wily about exposing what a greedy bugger Sir Winston was. How Lady Frome stays married to him, I’ll never understand. Agnes cracked me up with her summary of “most” people’s experience with lovemaking…too true…and it gives us a sad view into her previous marriage…sigh…

This is also the first story in the series that is not focused on all the survivors, as it concentrates on Ponsonby’s past. And I am surprised at what a wimp Flavian is and how quiet Agnes is in her own fortitude.

I do wish that Balogh had been more forthcoming show-wise about Ponsonby’s wanting Agnes. Instead she merely provides the words to tell us. I was also annoyed by Agnes jumping to conclusions so quickly. I had given her more credit for being an intelligent woman.

It’s a departure from tradition in two ways with three of the survivors bringing their wives(!) and the annual Survivors’ Club gathering at Vincent’s home — Sophia is pregnant — and not George’s home in Cornwall.

It’s that unexpected encounter at Middlebury that upends Ponsonby’s life…and saves him from his family’s machinations.

Inglebrook, Gloucestershire
Widowed twenty-six-year-old Agnes Debbins Keeping, a watercolorist, has never been in love, despite marrying William Keeping eight years ago. [Dennis Fitzharris, a publisher, was William’s cousin.] She currently lives with her spinster sister, Dora Debbins, in her cottage. Mrs Henry is their housekeeper? Oliver is their older brother, a clergyman with three children. Walter Debbins is their father who remarried. There is an aunt Millicent.

The Survivors include…
…the stammering Flavian Arnott, Viscount Ponsonby, has Arnott House in London where Biggs is the butler and Candlebury Abbey in Sussex, a house he still thinks of as David’s, his sickly elder brother, where Magwitch is the butler and Mrs Hoffer the housekeeper. Marianne, Lady Shields, is Flavian’s sister married to Oswald. His mother is thoroughly upset that Flavian has married, and it’s not because she is now the Dowager Lady Ponsonby. The Ponsonbys are a big family: Ginny is Flavian’s niece; uncles include the twins, Quentin and James; Cousin Desmond‘s father is James; Aunt Sadie; and, Aunt DeeDee has four or five daughters including Doris, Ginny, and Clementine. Pamela is a chambermaid. Madeline will become Agnes’ lady’s maid, and she has got guts! Finchley is the mother’s snooty dresser.

George Crabbe, the Duke of Stanbrook, has a country estate, Penderris Hall, in Cornwall. Julian is George’s heir and nephew. Sir Benedict Harper is now managing coal mines in Wales for the grandfather of his new wife, Samantha (The Escape, 3). Hugo and Gwendoline Emes, Lord and Lady Trentham (The Proposal, 1) are happy. Imogen lost her husband, Dicky, during the war. Ralph Stockwood, Earl of Berwick, is another survivor.

Middlebury Park is…
…the estate belonging to the blind Vincent Hunt, Viscount Darleigh, and his pregnant wife, Sophia Fry (The Arrangement), a dear friend of Agnes’. She has a boy, Thomas. Tab is Sophia’s cat.

Velma Frome Burton, Countess of Hazeltine, is the woman who broke her engagement. Leonard Burton, Earl of Hazeltine, was Velma’s husband and, supposedly, Ponsonby’s best friend. They have a daughter. Sir Winston and Lady Frome are Velma’s parents.

Miss Courtney is Max‘s sister, one of Ralph’s friends, who had died in the war. Madame Martin is a dressmaker in London. Mrs Kress and Miss Hawkins are friends of the Fromes. Bidulph and Griffin are friends of Desmond’s. Lady Merton had a party. Old Sainsley divorced his wife years ago. Mrs Beryl Dressler and her friend Hester are such gossips. Lord Catlin considers himself Ginny’s beau. Miss Moffatt plays piano. Mr Thompson lost a wager to Mr Radley. Mrs Turner is head of the altar committee who spoke with Miss Hill in strictest confidence.

Sir Everard Havell had to marry Rosamund Debbins. Peter Jenkins is some sort of cousin of Havell’s.

The background of the cover finds a coral and pink sunset settled over a blue-hued Candlebury Abbey set in the distance with greenery leading to Agnes in a turquoise gown, her back to us, and her head in profile, her right hand holding a pink rose behind her back. An info blurb is in a deep pink just below the top with the pink shadowed author’s name in white crossing onto Agnes’ back. A testimonial in white spans the grounds below the abbey while the title is in yellow at the bottom. At the very bottom is the series info in white.

The title is how Ponsonby views Agnes, Only Enchanting.

2 Responses to “Book Review: Only Enchanting by Mary Balogh”