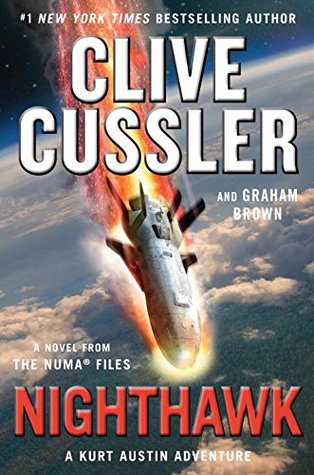 Fourteenth in the NUMA Files action/adventure thriller series and revolving around Kurt Austin and Joe Zavala who troubleshoot for an oceanographic institute.

It’s all about greed, and the lengths to which people will go — using global third-person subjective point-of-view certainly helps us to understand the thoughts of many of the characters — to obtain their goal.

Cussler/Brown used an action hook in the prologue to grab my attention — and a boring hook (!) in the first chapter. After that it becomes something of a dramatic Keystone Kops series of actions as all three nations step up, fall down, and run around like mad.

I thoroughly enjoyed Paul Trout’s flyfishing technique, lol. The history of the natives of Peru was also fascinating, if tragically sad. Even sadder was the whole business-as-usual vibe amongst the three competing governments. It’s like a game for them, lying and cheating to get what they want. If they don’t win? Oh well, there’s always tomorrow. Well, okay, in this instance, there may not be a tomorrow.

It is horrifying what is revealed, what that kickstart was for the mad genius. And they wonder why American citizens don’t trust their government…

It truly is a simple purpose behind the hijacking and that ticking clock scenario created by those convoluted (and quite ingenious) after plans is effective, especially for the planned effect. It’s a revenge I can understand, even if I don’t agree with it.

The resolution to the story will crack you up…and reinforce that game plan I mentioned earlier. At least this one will leave you laughing.

It’s a race among the Americans, the Russians, and the Chinese to reach that plane. Whoever gets it first will hold all the power…or not. It all depends on those fuel cells holding out.

If the cargo thaws, that’s it.

And there is no honor among partners…or thieves.

Kurt Austin’s past experiences with marine salvage, the navy, and the CIA make him ideal for his current position as a troubleshooter for NUMA. Joe Zavala is Kurt’s partner, an amateur boxer, part of Special Projects, and a mechanical genius. Merlin is a helicopter he “picks up”. The Angler is a multimillion-dollar submersible.

NUMA is…
…the National Underwater and Marine Agency founded by Vice-Admiral James Sandecker; he’s now vice-president of the U.S.A. Its mission is to explore, study, and preserve the world’s oceans. Dirk Pitt is the current director. Hiram Yaeger is the head of their computer department and designed Max years ago. Priya Kashmir is his new assistant. Rudi Gunn is the deputy director. Collin Kane is a bomb disposal expert.

Drs. Paul (Ocean Sciences) and Gamay Trout (her doctorate is in Marine Biology with a Master’s in Marine Archeology) are married and an important part of Special Projects; they’ll be stationed aboard the Catalina. Ed Callahan is the captain.

DUMBO is the Dynamic Underwater Monitoring Band, a series of highly sensitive listening posts throughout the Pacific Ocean.

Vandenburg Air Force Base is…
…control central for bringing back Nighthawk, a hybrid vehicle. Steve Gowdy, the director of ExAt projects for the NSA, is overseeing the final stage of a secret mission, Ruby Snow. His adversary, Air Force Colonel Frank Hansen, is the flight director.

The NSA is…
…the National Security Administration. Emily “Hurricane Emma” Townsend is a results-oriented specialist, no matter who it hurts, and in this case, if she fails, she’ll blame it on NUMA. A few years back, she’d been part of NASA’s Daedalus Project with Beric, who had been team leader. Hurns and Rodriguez are agents.

The MS Reunion is carrying a cargo of fruit; Buck Kamphausen is her captain.

The Russians
Constantin Davidov is the head of the Directorate for Technical Resources Acquisition. The Varyag is a Russian missile cruiser captained by Admiral Sergei Borozdin, a friend of Davidov’s. A Russian Typhoon-class ballistic missile submarine is nosing around. Its captain is Victor Tovarich of the Russian 1st Salvage Flotilla. Mikael is his First Officer. Major Yuri Timonovski was flying the second Blackjack; his flight engineer also survived.

The Chinese
General Zhang is with the Ministry of State Security; Lieutenant Wu is his aide. Captain Li Ying is the liaison officer in the People’s Liberation Army. Daiyu “Black Jade”, an extremely capable agent, has been indoctrinated into seeing the state as her mother and father. Juan Feng is her partner, and another of the unborn.

Peru
Urco is a Peruvian archeologist working a dig connected to the Chachapoya (the Cloud People). Vargas and Reyes are his associates.

The Falconer, a.k.a., Birdcaller, is a lone gun working a multitude of his own deals.

Diego Alvarado is under attack. Don Costa has funded the expedition. Francisco Pizarro is leading it, I think.

The cover finds the Nighthawk re-entering a gray and white atmosphere in an enveloping blaze of oranges, reds, and yellows. Cussler’s name is HUGE in white with a black outline at the top; Brown’s name can almost be seen underneath it and to the right. The title is in a deep red outlined in black at the bottom with the series information above it in white and an info blurb reminding the reader whose adventure it really is at the very bottom.

The title is the focus of this desperate hunt, the Nighthawk.