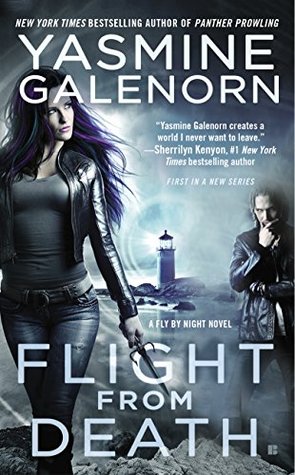 First in the Fly by Night urban fantasy series usually set in Seattle and revolving around Shimmer, an exiled dragon. (This is a spin-off series from Otherworld / Sisters of the Moon.) It’s been a couple of months since “Flight From Hell“, 0.5 (15.5), and now we’re off to in Port Townsend, Washington.

We get more background on what spurred Shimmer on to steal from the silver dragons, what her life has been like, and we’re introduced to Chai. His character ushers in some interesting restrictions; it’s gotta be hard to keep track of characters with these odd sorts of quirks. I know I kept being pulled up short whenever the necessary constraints had to be considered.

Nor does Chai come with good news for Shimmer! It allows Galenorn to introduce a series-long conflict into Shimmer’s life with this bit. There’s also a quick bit in here that explains succinctly how Alex came to know Lord Vine.

From what Patrick tells us of Nathan, it’s a darned good thing he refused to turn him! You know it’s bad when the family agrees!

There’s a good bit in here about the dragons and their characteristics along with the need blues have for water. Degoba discovers the truth about Nessie! Nor is any of this the only anthropological background we get. And I hate to say that Degoba makes an excellent point when he notes the similarities between forest wights and humans, between all species who live on this planet. I hate that he was so reasonable about it! Ick.

Okay, so on to the story. It’s good and certainly has a lot of tension and drama. Phew. The characters are great, they’re warm, and we have the opportunity to see the characters in action — a geographic spread of characters! I do get the impression that Port Townsend will definitely be playing a part in the series. And yet it’s missing something. A number of side events were too easy. I am looking forward to their next adventure in Flight From Mayhem, but it’s not that panting-at-the-bit need to read.

An old friend needs help with what they all thought was a simple haunting. An easy favor, until the truth about the trapped spirits is unveiled.

A case that turns deadly with an unexpected eighty-year-old murder and a cursed house that combines to tear into the team.

…and the grounds are littered with bones.

Shimmer “Little Sister” is a blue water dragon who has been banished from the Dragon Reaches for the next five years. Stacy is Shimmer’s only human friend and works as a security guard at a local nightclub and at an all-night coffee shop. Chai is a djinn whom Shimmer met after the orphanage.

Alex Radcliffe is a two-hundred-some-year-old vampire who owns Fly by Night Magical Investigations Agency. Juanita is his trusty bowie knife. Glenda is his about-to-be-ex succubus girlfriend. Bette, the receptionist, is a Melusine, a snake shifting water moccasin. Ralph is Alex’s IT guy, a werewolf who faints at the sight of blood and has a crush on Shimmer. Technically, he’s part of the Glacier Peak pack.

Port Townsend
Patrick Strand had been a friend of Alex’s in another life. Now he’s a vampire who wants to open a new B&B, the High Tide, in Port Townsend. Zera was the vampire who turned him. He was lucky to escape her.

The Bucklands had owned the house before Nathan; Terrance Buckland had been a business associate of Nathan’s. Toby is the only family member still alive, and he works at the En-Royale Garage as a mechanic. Aunt Anna Lee had embraced their gypsy heritage and was a fortune-teller and witch who believed in payback; Aunt Kendell is still alive and also believes in payback. Lacy Buckland is haunting the house. A brief history on Mia Buckland (who was probably Lacy’s sister), who married Lieutenant Jacob Ayers in 1945. They died, along with their year-old daughter, Tansy.

Tonya Harris is a local witch of the fam-trad variety and a businesswoman who owns Harris’s Emporium of Magic and Witchery. Patrick had dated her mother. Lionel works in Tonya’s shop. Turns out her Uncle Van was quite the useful character. Degoba, of the Salish tribe, is a local legend with knowledge of local myths, creatures, and urban legends about the area. Tonya thinks he’s a spiritwalker. Brother Bear is his huge dog.

The police include Officers Roger Willis and Paris Veraday (she also makes and sells quilts). Vinny is the medical examiner and Roger’s cousin. Jack is the ME’s assistant and has a side job as a gravedigger.

Mable runs the local genealogy club. Marty is a regular at Jo’s. The Jensons had tried homesteading but they all disappeared. The Kinzie Battery was part of Fort Worden. Brad Iverson is almost taken by a siren.

Nathan Striker, a financial genius, had been a friend of Patrick’s, but not many others from the sound of it.

A forest wight is born out of the dark hearts of ancient trees and has a variety of nasty abilities. They live in a loose-knit hive. A sapwalker are floraeds and highly volatile and dangerous Earthside nature Fae. Wolfen are werewolves born with severe defects and can turn their victims into wolfen. Jackaboy Jones is a werewolf whose wife wants to divorce him. A wolpertinger is a Bavarian chimera.

The Dragon Reaches is…
…on another plane of existence, at the top of the world, and is home to the dragons. The Wing-Liege, a.k.a., Lord Vine, is one of the main council members and an advisor to the emperor. A dreyerie is a dragon home. Silvers (they’re the rulers), whites (the worst when it comes to money and greed, but very protective of family), and golds live in the tall peaks; reds live in lower elevations; shadow dragons (a.k.a., black dragons) live in the Netherworld; greens live in the temperate areas; and, blue dragons (higher ranked than whites and very sensual and emotional) live in the oceans. Your family lineage is EVERYthing. The Lost and Foundling is an orphanage for abandoned dragonettes and is where Shimmer grew up. Greanfyr, third in line to the Emperor and Empress, is the white from whom Shimmer stole. Slap-Happy is his jerk of a son. Having your hair cut off is a huge insult. It even has a name: Savarthi’s Shame.

Carter is a half-demon, half-Titan who had dated Shimmer in “Flight From Hell“, 0.5 (15.5). Marion Vespa runs the Supe-Urban Café. Roman is the vampire son of the Queen of the Vampires, Blood Wyne. Yep, Alex joined the Seattle Vampire Nexus after events in “Flight From Hell“. Mennolly D’Artigo is Roman’s consort. The Werewyx search engine allows for refined searches into paranormal websites. That Ley of the Land website was quite handy.

The cover is purplish grays with a bright spot of blue-violet in Shimmer’s hair. Wearing a tight gray T, a short black leather jacket, and belted, distressed blue jeans, she has a firm grasp on her knife, striding away from a contemplative Alex in his long leather jacket with a purplish lighthouse in the distance across the waters.

The title is nebulous and could refer to so many possibilities in this Flight From Death for the spirits, the town, Shimmer herself, Patrick…

2 Responses to “Book Review: Flight From Death by Yasmine Galenorn”