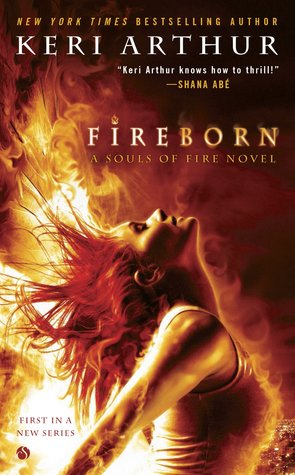 First in the Souls of Fire urban fantasy series set in Melbourne, Australia, and revolving around Emberly, a phoenix.

In 2014, Fireborn was nominated for the Aurealis Award for Best Fantasy Novel.

It’s an interesting take on phoenixes with a reasonable balance of strengths and weaknesses. Arthur has definitely fleshed their background out. That part made me think of the Highlander and all those life experiences he draws upon. This particular story also reminds me of Arthur’s Riley Jenson, Guardian, Dark Angels, and Nikki & Michael series. I’d put Fireborn‘s ranking closer to Riley Jenson (this is still the best of Arthur’s series) than the others.

Arthur does tell us all about how Emberly feels about Sam, that she hates how he reacted but still wants him. I just wish she had worked harder to make me feel Emberly’s emotions. As for Sam, his character’s reactions are rough-edged, and Arthur teases us a lot with Sam’s potential in the field, but she dips in and around his actual abilities without revealing anything. I do like Jackson. He makes me think of Arthur’s Lucian Dupont from Dark Angels with a blend of Quinn from her Riley Jenson, Guardian. He’s certainly accepting of Emberly’s interests, *grin* He does like that she can use a gun.

“…I’m more beta than alpha. Which means I generally ask for opinions before I do whatever the hell I want.”

I do not like this PIT nor do I like Sam. Considering how much Sam needs Emberly’s cooperation, he certainly isn’t very tactful, and he and his organization don’t care who they damage or who they hurt to get what they want. It’s okay to let people die. Again, as long as they get what they want. Doesn’t sound very “law and order” to me. Oh, please, Sam claims that they don’t drug people they want cooperation from. What a lie that is. Sam’s been jerking her around from the beginning, and I don’t blame Emberlyn one bit for holding back on him. PIT is certainly jerky enough for how they keep leaving Em after they’re done using her. That scene where they dump her and Jackson outside? If she’s being pursued by the bad guys, why is PIT putting her at risk like this?

I find it rather hypocritical of Sam to note that the sindicati, as a “criminal” organization, don’t care “about convention or rules, and they always stack the odds in their favor”, ’cause PIT isn’t doing anything like that…noooo…

Some stupid things. If Emberly needs to flame to get rid of whatever Sam did to her, why doesn’t she hook up with Rory as quickly as possible to get the energy she needs? It’s that stupid trope again about ignoring the practical aspects of life. Nor can I believe that Emberly and Jackson aren’t more cautious entering someone’s house after what happened the first time over at Michelle’s.

LOL, I did enjoy how Emberly circumvented Amanda’s maneuvers at the bus station. What I don’t get is why she never went back to the truck to get those drives.

Okay, the hostage exchange thing was a big trope, and I am surprised that with all the eons of experience Emberly and Rory have, that they don’t get their wording tight enough on that end bargain. I suppose we needed to have that bit of tension tossed in.

After all that whining, I really did enjoy reading Fireborn. Emberlyn’s character is feisty and stubborn…hmmm, am I reading myself into this??…and despite all the centuries of life she’s experienced, she’s not jaded. She still enjoys life and people. She comes across as someone I’d love to know. Rory sounds pretty hot himself…every pun intended on that one, lol.

Reading Wicked Embers is next up as I must find out if Emberly can keep Sam out of her life, what the sindicati does in retaliation, and more about the luscious Jackson, yummy.

It’s Emberly’s knowledge of the professor that forces her participation in the investigation. She knew him. She knew him better than anyone else at the Institute, and she may be the key to finding his murderer.

For his death is a major setback in finding a cure for the red plague. An epic catastrophe which catapults the investigation into his murder into the arms of PIT, a very powerful and very secretive law enforcement division — with an investigative team led by Sam, Emberly’s former lover.

Emberly “Red” Pearson is a phoenix who dreams of the future and is working as a research assistant in this lifetime. Rory Pearson is her life mate and working as a fireman in this lifetime. Jody had been Rory’s human fiancée who had died four years ago. Rosie is a friend with benefits for Rory, and she works in the fire station office. Mike is a street teen Rory has befriended, and he has connections of a black-market kind.

Jackson Miller is a fire fae who uses Miller Engineering as a cover for his real work as a private detective as Hellfire Investigations.

Detective Samuel Turner is an ex-love of Emberly’s, five years in the past who now works for PIT and is willing to roll over and through anyone. Luke was his older brother, the first son who had been denied nothing. And what he had wanted then was Emberly.

Paranormal Investigations Team, a.k.a.,…
…PIT is between the police and the military and deal with paranormal problems. Part of Sam’s team includes Rochelle Harmony, a fire fae, who is a compositor. Adam is Sam’s vampire partner assigned to shadow Emberly, to keep her alive. I think Henrietta is their boss.

Chase Medical Research Institute is…
…a privately funded organization doing biological and medical research. It was founded by Harriet Chase, referred to as “Lady Harriet” for her snootiness. Abby is her assistant. Professor Mark Baltimore is a scientist searching for a cure to the red plague. Professor Jake Haslett was Mark’s running partner. Ian Grant is a day shift security guard; Ryan Jenkins is a night guard.

Officially called the red plague, unofficially they are referred to as the Red Cloaks, a diseased form of vampire with a hive mind.

Sherman Jones is a thug-for-hire and petty thief. Marcus Radcliffe III operates a chain of secondhand stores as a front for selling black-market goods and information. Sandy and Michelle Rodriguez are waitresses at Baltimore’s favorite breakfast cafe.

The sindicati are…
…the vampire version of the mafia. “Professor Heaton” attempts to mind control his way into the lab. Lee Rawlings is an empathic vampire. Henry Morretti is another vampire. Michael Venton is a guard in Emberly and Rory’s apartment building.

A phoenix is a fire spirit who can take three forms: flame which allows him or her to burn anything inside or out, firebird, and flesh. They are fated to never find emotional completion in or outside their own race, to only bear a child with the life mate chosen for him or her when they turn 16, and they need to regularly merge flames to maintain their life energy. They live 100 years unless they are killed before that, and then they need their life mate to be alive to bring them back to life. On the plus side, they are reborn as adults with all their memories.

The cover is gorgeous with a dark background and a touch of a nightlit city in the lower right as a profile of Emberlyn, her head thrown back in ecstasy, her red hair spiking and bursting into flames as small fires lick their way up the front of her wifebeater, and a borealis of flame outlines her body in a range of deep reds, oranges, and white-hot yellow.

The title is an introduction to the primary character, for Emberly is Fireborn.