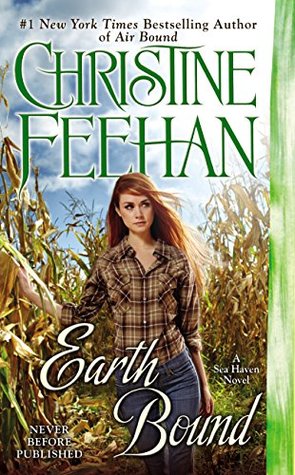 Fourth in the Sisters of the Heart paranormal romance series and revolving around six sisters of the heart bound by the elements in the small town of Sea Haven, California, each of whom is stalked by an inescapable past… It’s been a few weeks since Air Bound, 3, and the couple focus is on Lexi and Gavriil Prakenskii.

It’s all about love, the love and support of a good woman and a loving family. The down-deep goodness within a man to care for and protect those he loves. Combine this within that supportive family, and you can conquer the world…or at least protect your corner of it. It helps that Feehan uses third-person omniscient point-of-view (the primary perspectives are from Lexi and Gavriil) with the other sisters providing their own perspectives in some scenes to give that sense of all-encompassing encouragement.

Love-wise, Lexi and Gavriil must be meant for each other, since it’s insta-love time. Again. Actually, no, this time around the love is even instanter. And shy little Lexi who couldn’t say boo to an ant is so very protective of the big, bad Gavriil. She can see deep into him. How desperately he needs love and acceptance. How much pain he’s suppressing. How quickly Lexi’s compassion rises up.

Gavriil yammers on and on about how he must go carefully with the skittish Lexi. Oh, so, carefully, so he doesn’t scare her with what he wants. Yes, he’s so careful, he waits, what? A couple days??

I got it. I got it! Jesus. Feehan could have shortened this story up quite a bit, made it so much more interesting, if she hadn’t been so repetitive. She could have enriched her other characters, gone further with more action, involved us in the farm. Please, anything but the moaning and whining.

Okay, sure, we’d all love someone we can trust to protect us. To have our backs, no matter what. I do love how honest Gavriil is with Lexi, his insistence that they make their own rules. Especially when he explains how killing isn’t always wrong. I gotta say, I’m with him on this.

The kids crack me up with their spying — Max is teaching them to protect themselves — especially that Benito, *laughing*. Who is also interested in art and doing restorations.

Lissa is nervous about another Prakenskii brother showing up. She’s seen what happens when one of her sisters meets one of them! I’m wondering if her story is next?? Lucia is struggling with her own horrors. Not just their kidnapping and the plans those kidnappers had for these children, but the guilt and fear Lucia feels for loving Airiana and Max.

We do learn more about the Prakenskiis’ family background. The influence their father had, that led to his murder. It does at least explain why the brothers were taken and split up.

Um, since when does a young girl uses a sentence like “You make me feel grounded”?

Gavriil has come to Sea Haven. To warn his brothers of the hit list they’re all on. Only he’s hit. Awestruck by the woman he’s rescued. She is destined for him. He can feel it in his soul. But how can Lexi find happiness with a man steeped in secrets and shadows, one intimately acquainted with violence, and whose very love could be the death of them?

The very shy Lexi Thompson (her real name is Alexia Wilson) has an earth affinity and bears full responsibility for their farm, despite her panic attacks and severe paranoia. She’s in the Witness Protection Program.

The thirty-seven-year-old Gavriil Prakenskii is the most violent, vicious, and silent of the seven Prakenskii brothers…with the pain to match. His particular gift is blurring, fooling the eye into thinking he’s part of his surroundings. He plans to leave his two Black Russian Terriers, Fierce Black Dragon “Drago” and the pregnant Kiss of Death “Kiss“, with his brothers. Lyutyj is the runt.

Airiana Ridell, a mathematical prodigy working for the government, and Max Prakenskii use air and have an insta-family since events in Air Bound, rescued Lucia, Benito, Nicia, and Siena. Theodotus Solovyov was Airiana’s father.

Judith Henderson Vincent is spirit and can amplify all the other elements; she owns an art store, and her husband, Thomas Vincent (Stefan Prakenskii), bought the gallery (Spirit Bound, 2).

Duncan Caine is a pedophile who leads a cult of yet more perverts. He “married” Lexi when she was eight and murdered her parents. The older she gets, the more he beats and abuses her for maturing. Caine’s cousin, the Reverend RJ, had started the cult. Enforcers include Benjamin Frost, Peter Rogers, Darrin Jorgenson, Shelton Edwards, James Dawkins, Gene Fielding, Howard, Daniel Forest, and Trey Bridges.

Lexi had thought Carla Shore was her friend. Daiyu Zhang had been a Chinese doctor and acupuncturist whose husband talked her into joining the cult.

Uri Sorbacov is the son of Kostya Sorbacov, who had murdered the Prakenskiis’ parents and taken the brothers, separating them, forcing them to become covert operatives. He’s trying to erase any evidence of his father’s doings. Efrim Goraya, good with martial arts, and Georgii Yenotov, brilliant at languages, are some of the agents sent after the Prakenskii brothers. Evan Shackler-Gratsos wants to kidnap Airiana.

It’s a country cover with its towering cornstalks, as the long-haired, red-haired Lexi strides down the row in her brown plaid shirt and jeans. The author’s name is in a grass green outlined in a glowing lighter green while the title is at the bottom in white and outlined in black. The series information is in white and to the right of Lexi’s hip.

The title describes Lexi and the source of her power, Earth Bound.