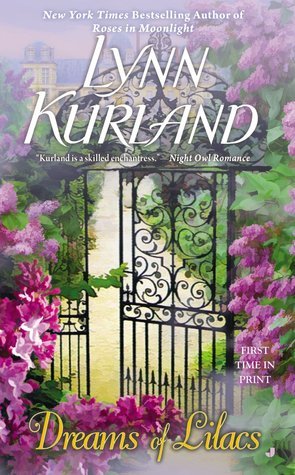 Buy on Amazon
Goodreads
Also by this author: Ever My Love, A Tapestry of Spells, Star of the Morning, The Mage’s Daughter, Princess of the Sword, Dreamspinner, River of Dreams, Dreamer's Daughter

Sixteenth in the de Piaget historical romance series and revolving around the de Piaget and MacLeod families. This story takes place in 1232, and the couple focus is on Isabelle de Piaget and Gervase de Seger. If you’re interested, there is a chronological listing of the de Piaget books on my website.

Hmmm, how do I put this? It’s a lovely sweet story, and I do love how Kurland blends contemporary dreams with the values and manners of the 13th century and turns it into a riotous romp of delicious tension and crazy romance. It is filled with impossible situations with a known end result that Kurland provides with a twist.

Isabelle is a bright woman as well as a naive one. She’s generous in wanting to help, and she’s a very spunky lady — I adored how she took on the stepmother and the ex-fiancée. Still, I go back to that naiveté and wonder why Isabelle thinks she can go jaunting over to France all by herself.

Unfortunately, I do have a number of questions for Kurland. For one, I don’t understand how Gervase’s “coffers are emptying at an alarming rate”. His dukedom is rich. He’s not off battling anyone nor competing in any tournaments. He doesn’t appear to waste money on going to court. Kurland never makes it clear where the money is going, although she subtly infers that his father wasted the ready.

Within one paragraph, Kurland states that Gervase is heir to a vast estate (which raises more questions about that monetary loss) and that his father is dead. As heir, hasn’t he inherited?

How can so many people be so unobservant that they can’t see that Isabelle is a girl or that her speech, hands, and skills indicate she is not a servant? The way Isabelle is treated after her rescue is clumsy and the writing feels more juvenile than usual. Yes, I did say juvenile. Kurland writes humorous fun stories, and yet there is a juvenile aspect to it at times. She’s still well worth reading when you want some escapist entertainment.

I have to confess, I don’t understand why Isabelle didn’t make herself known to Gervase once her memory came back. Her brother is just down the road a piece. Not telling him does make this more fun, but still rather silly.

What is the pushy de Coucy guardsman doing hanging around Seger? Wouldn’t he have ridden off with the master who employs him? I don’t see how the names Imogen, Catherine, or Isolde are similar to Isabelle. What’s with Nicholas’ reaction to seeing Isabelle? It does make great drama, but it’s so over the top. If Isabelle is as lovely as Amanda, why are all the suitors disappointed that only what’s-her-name is left? How is it that Cook is so terrible and still employed at the chateau? Why does Isabelle have this urgent need to keep “escaping”? If Isabelle’s brothers have taught their wives swordplay, how is it that Isabelle never learned?

What can I say? It’s an over-the-top gothic romance that manages to be frivolous, idiotic, and still fun in a soap opera sort of way.

Isabelle de Piaget is tired of being protected, tired of being overlooked, and wants some adventure in her life. Only she gets so much more than she bargains for when she loses her memories and ends up in the clutches of a demon who casts spells and terrorizes the populace.

The frustrated Isabelle de Piaget is the youngest daughter of Lord Rhys and Lady Gwennelyn from Another Chance to Dream, 1.

Isabelle’s siblings
Miles is Isabelle’s twin brother. The boasting, rather obnoxious Robin — he and his wife, Anne (If I Had You, 2) have two children. Amanda is married to Jackson Kilchurn IV (Dreams of Stardust, 3), and they have a daughter and newborn son, Jackson the Fifth. John and Montgomery are the unmarried brothers. Nicholas and his pregnant wife, Jennifer, are at Beauvois in France (When I Fall in Love, 4). They have a son, James.

The horribly crushed Gervase de Seger, Duke of Monsaert, has his country seat at Chateau Monsaert in France. The silent and efficient Sir Aubert is his best friend and the captain of his guard. Parsival had been his favorite horse, Diablo is his best warhorse, and Philip is his second-fastest horse. He has six half-brothers: Lord Joscelin is his favorite, and Lord Guy runs the estate. Then there are Lords Lucien, Pierre, Fabien, and the six-year-old Lord Yves who is in need of a smack. His stepmother, Margaret, Duchess of Monsaert, is a nasty woman, unloved by any of her sons. Abelard was his grandfather and had some adventures as a nun. His father, Gaspard, seems to have been an absolute wastrel.

Master Paquier is the nasty, reluctant personal surgeon to Gervase. Mistress Jehanne is the cook; Adele is one of the kitchen maids. Sir Denis and Sir Lucas are the guards Sir Aubert assigns to Isabelle. Master Humber is his prévôt, his forester, and why his forester would be involved in the spring planting, I don’t know. Cyon is a page. Master Simon is the stablemaster.

Frédéric, the Duke of Coucy‘s daughter, Evelyne, broke off her engagement with Gervase after his accident.

Arthur of Harwych is a would-be suitor. Captain Allard is the captain of the ship Isabelle escapes on.

The cover is consistent with the title. Unrelated to the story. It is a lovely cover with its door-sized wrought iron gate, surrounded by lilac bushes, and opening onto a gravel path bordered with greenery.

I have no idea how the title, Dreams of Lilacs, came about (the only place “lilacs” appear is in the title and on the cover). It would have made much more sense if they had been forget-me-not dreams.

4 responses to “Book Review: Dreams of Lilacs by Lynn Kurland”