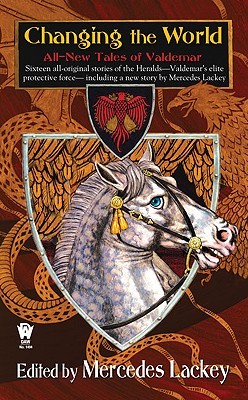 Goodreads
Also in this series: Sword of Ice and Other Tales of Valdemar

An anthology of sixteen short stories in the Valdemar young adult fantasy series.

There’s one constant that keeps cropping up in various stories when a Herald complains about a task he has to do, and a Companion reminds him that this is exactly what he is supposed to do. Help people. Help Valdemar. Because helping and protecting the people of Valdemar is important and can only help Valdemar and a Herald can’t pick and choose which tasks he’d prefer to do.

“Softly Falling Snow” (towards the latter end of Elspeth’s reign)

“The Last Part of the Way” (a Rhi and Dionne short)

“The Thief of Anvil’s Close” (Dann Family of Haven, 2)

Mercedes Lackey‘s “The One Left Behind” makes me cry and laugh. I love the revenge Marya achieves, and I ache for her losses. Selfish, nasty people thinking only of their own comforts! Arghhh!!!

Rosemary Edghill & Denise McCune‘s “For Want of a Nail” is a fascinating peek at the very beginning of Valdemar when the baron was just starting out with his followers to create his dream. This story is from the perspective of a foot soldier-turned-scout and his worries.

Elizabeth A. Vaughan‘s “Softly Falling Snow” is so sadly lovely as Elspeth regrets the passage of time and the constant stress of keeping her kingdom at peace.

Mickey Zucker Reichert‘s “The Reluctant Herald” is funny even though it doesn’t sound right. It sounds too jokey, too modern, too abrupt, even as our reluctant herald manages a narrow escape.

Elisabeth Waters‘s “A Storytelling of Crows” finds a Companion stumbling on Maia in the Forest of Sorrows with an arrow-studded pile of rags on its back. This is cute with a small crew of helpful critters. Waters starts with some nice detail, but then suddenly realizes she only has so many pages available. Yep, she speeds up and summarizes a whole lotta events to fit it all in.

Kristin Schwengel‘s “Waiting to Belong” is joyous, bitter, and then smooths into a waiting stance as Shia tends the town’s ills and hurts. Waters could take a hint from Schwengel’s story as Schwengel has nicely wrapped up several years into a short story. And has left me wanting more, dammit.

Brenda Cooper‘s “The Last Part of the Way” is another Rhi and Dionne story in which they help a depressed young Herald. It’s a soft yet sorrowful tale for all those involved.

Stephanie D. Shaver‘s “Midwinter Gifts” finds us reading of Bard Leila (from Under the Vale and Other Tales of Valdemar: “Sight and Sound”) with a brief mention of her twin, Herald Lyle. It’s Wil’s Companion, Vehs, and Queen’s Own Talamir who pairs her up with Herald Wil to investigate a possible serial murderer! A cute story of unrequited love and frustrated confusion.

Michael Z. Williamson‘s “Wounded Bird” is a story that will have women and, ahem, intelligent men (lol) up in arms as Riga puts up with the Mirr idea of courtesy.

“‘I swore my Warrior’s Oath to protect the weak,’ she said, ‘And I didn’t swear that it stopped at the edge of our lands.'”

I do love Riga’s ending sentence!

Kate Paulk‘s “Defending the Heart” is an important story. I think it introduces us to Jem and Ree, and being on the farm. It is also the story in which the Hobgoblin King comes to “life” and the reason why the villagers are, later on, so accepting of Ree. I can understand (and despise) that they are conscripting soldiers, but why would these soldiers, who belong to Grand Duke Parleon in whose lands the farm stands, take people to sell as slaves and why would they be looting and burning out their own people. How does the duke expect his subjects to farm, to produce food to eat and trade, to raise taxes if he’s eliminating them and their farms, towns, villages? It’s also the story of Amelie.

Sarah A. Hoyt‘s “Matters of the Heart” comes right after “Defending the Heart” and finds Lenar coming home from the wars. It’s a battle of an argument followed by yet more physical battles.

I do like the stories of Jem and Ree, but I do wish Hoyt didn’t make Ree sound so pathetically pitiful. I can understand why Ree would be insecure, but jesus, Hoyt takes it a bit too far.

Tanya Huff‘s “Nothing Better to Do” is incredibly sad as well as funny when Herald Jors has to rescue and transport a toddler. I think he gains a new appreciation for what mothers have to go through, lol. The ‘ossy isn’t too excited about all that sticky, either…*she says laughing*…

Fiona Patton‘s “The Thief of Anvil’s Close” is a Dann family story with an unexpected burglary solved for the blacksmith. Seems a very skillful thief is stealing tools and goods from him, and Edzel is a’stormin’ and a’rantin’ that the watchmen are totally useless. It’s amazing how much information Patton can get into a story and make it so good!

Nancy Asire‘s “Be Careful What You Wish For” is too true for Herald Tomar. He’s headed back to Karse to find out how the rest of the family is in Karse. It’s safer there now, for the Son of the Sun has declared Valdemar a friend. Only the meeting he has with family is not at all what he expected.

I’ll be hoping that a future anthology lets us know what happens to Doron.

Ben Ohlander‘s “Interview with a Companion” is too, too funny with a modern-day reporter hoping for an explosive exposé who ends up interviewing a Companion in Kentucky. A Companion who sent him some of Mercedes Lackey’s books to read and has a few words to say about some woman writer in Oklahoma who writes about Companions and elves building race cars. He also talks about the Companions who have changed our world’s history besides the background he gives on Vanyel and magic in Valdemar.

The cover is gorgeous in its rich browns and golds with a general background of a deep golden tangle of dragon and gryphon against a red-brown. On top of that is an inset shield border of white steel with equally spaced rivets that frames the white Companion’s head emerging from the shape, a close-up of gryphon feathers behind him. Atop that is a smaller shield of black with a white steel border encasing a red firebird against a round golden sun-shape. The yellow title is above it all on a black background bordered by a deep burnished gold border. The firebird’s red creates the sub title with white providing the book info and the “edited by” information at the bottom.

The title is about the Heralds and how they’re Changing the World.